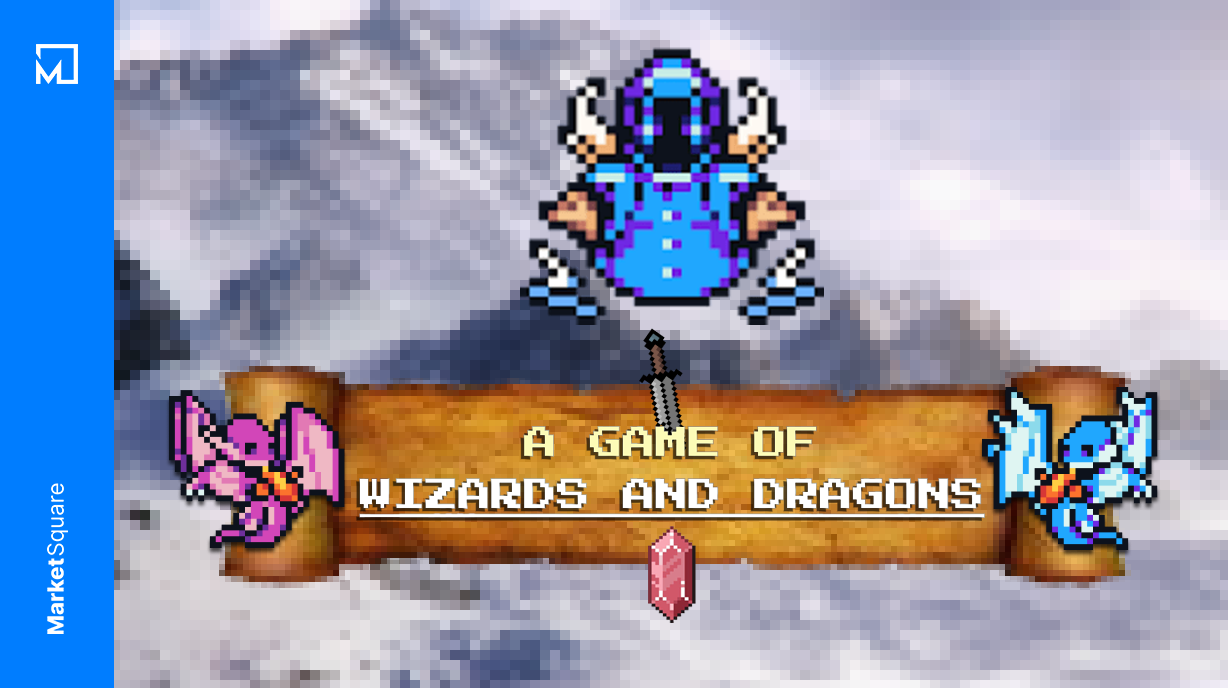 Hello and welcome to a very special Discovery of the Day! MarketSquare recently moved into its Open Beta, so for the first time, users can sign up for a profile and explore what the site has to offer without having to jump through any fiery hoops. From Monday to Friday you can check out our Discovery of the Day articles that feature some of our top picks from the realms of DeFi, NFTs, Blockchain-based games and more. Today we take a look at a project that is taking an amazing idea to the next level. Without further ado, let’s dive deeper into…Wizards & Dragons Game!

#The NFT Game That Cried Wolf

So unless you’ve been living under a rock, around two weeks ago, a fairly new NFT-based game called Wolf Game ran into a spot of bother. Now the concept behind the game is simple enough—when minting an NFT, players receive either a Wolf or a Sheep. However, the caveat is that there is only a 10% chance of minting a Wolf. Sheep generate the in-game currency $WOOL, but Wolves receive 30% in tax on all generated $WOOL in return for leaving Sheep alone. Without getting into too much detail on the game’s finer aspects, despite its relatively simple mechanics, Wolf Game turned out to be a major hit with both Sheep and Wolves selling for several ETH on the secondary market.

However, the spot of bother came about as a result of the game’s design. Now if you know anything about coding, it’s that creating a bug-free program is basically impossible. Wolf Game built everything into the Ethereum Blockchain, and this, as you can imagine, was a serious oversight. Once something is integrated into a Blockchain, and once an NFT has been minted, it cannot be changed. Sure enough, a bug was discovered in Wolf Game’s code that could result in a possible exploit. Due to the game’s architecture, the developer cannot patch the code and is now engaged in the process of migrating NFTs. In other words, the game is being completely recreated and new tokens are being issued, this negating the original NFTs.

You can find out more about the issue encountered by Wolf Game in this TechRaptor article by Robert N. Adams

While Wolf Game’s model is indeed a brilliant one, its approach was a misguided one. Oftentimes being first to market means that you have to bear the brunt of the consequences since you may not have anyone else to base your work off of or consult with for advice or pointers. Having said this, Wolf Games’ developer did publicly disclose the bug as well as a third-party audit of the code and the introduction of a bug bounty system to ensure that this issue never occurs again.

#Learning From Others’ Mistakes (And Your Own?)

Nothing quite like vaulting ambition, right? Well, if Aesop’s fable of the Tortoise and the Hare is anything to go by, it’s that slow and steady does often win the race. Now instead of rushing in like a fox in a hen house (or a wolf in a barn full of sheep), the devs behind Wizards & Dragons Game took a look at what Wolf Game was trying to achieve and wanted desperately to address the problems it had encountered. Having reviewed some threads on Twitter regarding exploits, the initial idea was to simply lock read functions during writes and solve the problem that way. Easy, right?

Wrong! The team, confident with their fixes, subsequently offered a bug bounty to anyone who could break the code before they went live with mints. Needless to say, within 20 minutes, three bugs had already been discovered. Soon thereafter, another more significant issue was discovered. $200,000 in bounty payments and several changes later, the team were able to redeploy because, unlike Wolf Game, the WnD team had split out the game contract from the collection, giving them the ability to redeploy as and when they desired.

Oh but it doesn’t end there. About 7,400 addresses were then added to the contract using a gassy approach, costing around 25 ETH! Now that’s quite the fee! Then the game started, and someone managed to mint 4 Dragons in a row! Yikes! Minting was paused, a review was conducted and an approach known as ‘commit+reveal’ was instituted. 4 hours later, minting was unpaused.

If you want to read more about the exact details of the above process, check out the original Twitter feed posted by @wndgame

#Here There Be Wizards (and Dragons)

Look, the above information was shared by the developers themselves. Why? Simply because transparency and honesty matters, especially in a space like crypto that’s rife with Machiavellian tactics, scams and rugpulls. While Wizards & Dragons Game may not be the OG, and while it did suffer from some teething problems (which project doesn’t?), if it had taken a less careful approach, well…the project may have ended all together. Yeah this is conjecture, but it’s not a possible outcome that’s easily dismissed, and I’m sure the devs themselves would agree with me.

The idea is to create lasting value by developing a fun community-driven game that is fully playable on-chain through the magic of NFTs within a Decentralized Finance (DeFi) protocol. At time of writing, Wolf Game and several forks are unplayable due to the exploits affecting them. This is why Wizards & Dragons has developed some watertight fixes for all known vulnerabilities affecting the open source Wolf Game contracts, and yes, this does include Flashbots bundle protection. As such, the smart contracts will be verified on Etherscan.

All metadata and pixel art related to Wizards & Dragons Game are fully generated and stored on a permanent basis on the Ethereum Blockchain. Since Wizards & Dragons is released in the public domain, the game may be used in virtually any way in which a player or developer wants.

#The Path to Redemption

OK, so I guess you could call this the Wizards & Dragons Game Roadmap if you like. In essence it’s divided into three interrelated parts called ‘Acts,’ and right now, we’re on Act I: Wizards & Dragons! Anyway, let me not divulge all the details. Take a look at the graphic we prepared just for you: 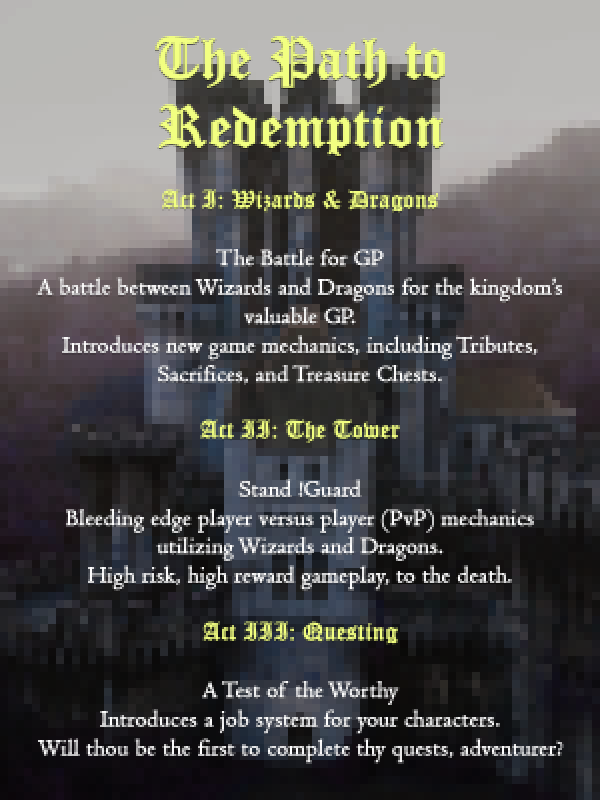 If you would like to find out more about The Path of Redemption (The Wizards & Dragons Roadmap), you can view it in its original form on this Medium post

#The Inner Workings of Wizards & Dragons

Right, so you already have a decent idea of how Wolf Game works, so you can imagine that Wizards & Dragons Game works much the same. Let’s break it down: 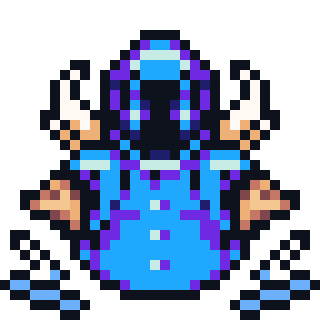 ‘I awaken. My first thought is of the tower, and my duty…I begin my shift. I !guard. The day is long, but I know my purpose…my mission. I will !guard. For it is all I have ever known…’

So Wizards guard the Tower and earn GP, the game’s currency: 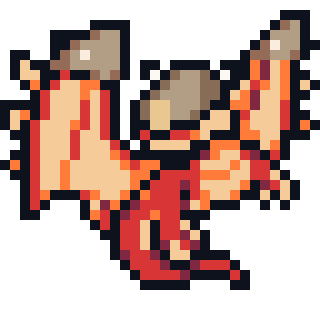 Now Dragons collect GP from Wizards and steal mints from other players! Gasp! These scaly beasts receive a rank between 5 and 8 when they are minted— the higher the rank, the higher the proportion of GP and stolen mints. For example:

Gold Pieces (GP) is an ERC-20 token that serves as the primary in-game currency for Wizards & Dragons. GP allows players to mint Wizards, Dragons, and other valuable assets for the game. As you’ve probably already ascertained, GP is earned by staking Wizards and Dragons. The supply of GP is capped at 6 billion.

GP can be stored in Treasure Chests, a kind of ERC-1155 token. At time of writing, the price is 25,000 GP. Treasure chests can be offered as insurance to stop Dragons from stealing players’ mints. Dragons will accept the bribe 50% of the time.

Players can pay tribute by throwing GP into ‘The Pit.’ If The Tower is satisfied with their patronage, a mysterious looking item, rumored to be crucial to the prosperity of the Tower in Acts II and III, will be granted to the player. However, there is a limited number of mysterious looking items. Once the supply cap for each item has been reached, no more can be obtained… 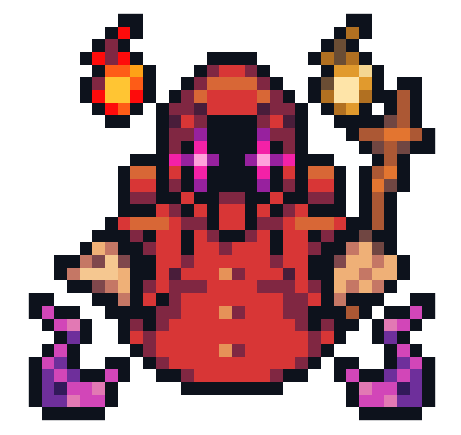 The path to salvation is trying, and at times, much must be given in order to attain it. Players may choose to sacrifice a Wizard or Dragon on the sacred altar. The Tower will recognize their absolute and unwavering faith. In return, an exceedingly scarce and mysterious looking item, said to be paramount in leading and controlling the pace of PvP battles in Acts II and III, will be granted unto them. Again, there is a limited number of mysterious looking items. Once the supply cap for each item has been reached, no more will be available…

For more information on Minting and to view all the details about Wizards & Dragons Game, please refer to this Medium article

So there’s a whole lot to unpack with Wizards & Dragons Game, but it’s pretty clear that, despite having only been around for a short while, it’s proving to be very popular. Just take a look at the details below…

If you missed out on minting, you can always pick up a Wizard or Dragon over on the project’s OpenSea page. And now it’s time for some stats!

Wizards & Dragons Game has a whole lot going on that you’re not going to want to miss. Follow them on Twitter and be sure to join their official Discord so that you can talk to the devs, mingle with the community and learn more about how this innovative approach to NFTs and DeFi.

And that’s it for today’s Discovery of the Day! If you haven’t signed up for your very own profile here on MarketSquare, well, what’s stoppin’ ya!? You can’t tell me you don’t want to hear all the lastest news and insights about the exciting world of crypto, so there’s no excuse! Be sure to keep your eyes peeled and ears open for new content, projects and articles right here on MarketSquare.io! Later Blockchain fans!

Brynn is the Content Manager at ARK.io, lead DeFi writer for MarketSquare and die-hard metalhead. When not researching yield farming, he spends his time crushing demons in DOOM or shredding his favorite axe.
Tags:
NFTs
DeFi
On-chain
Share:
More from MarketSquare
View all