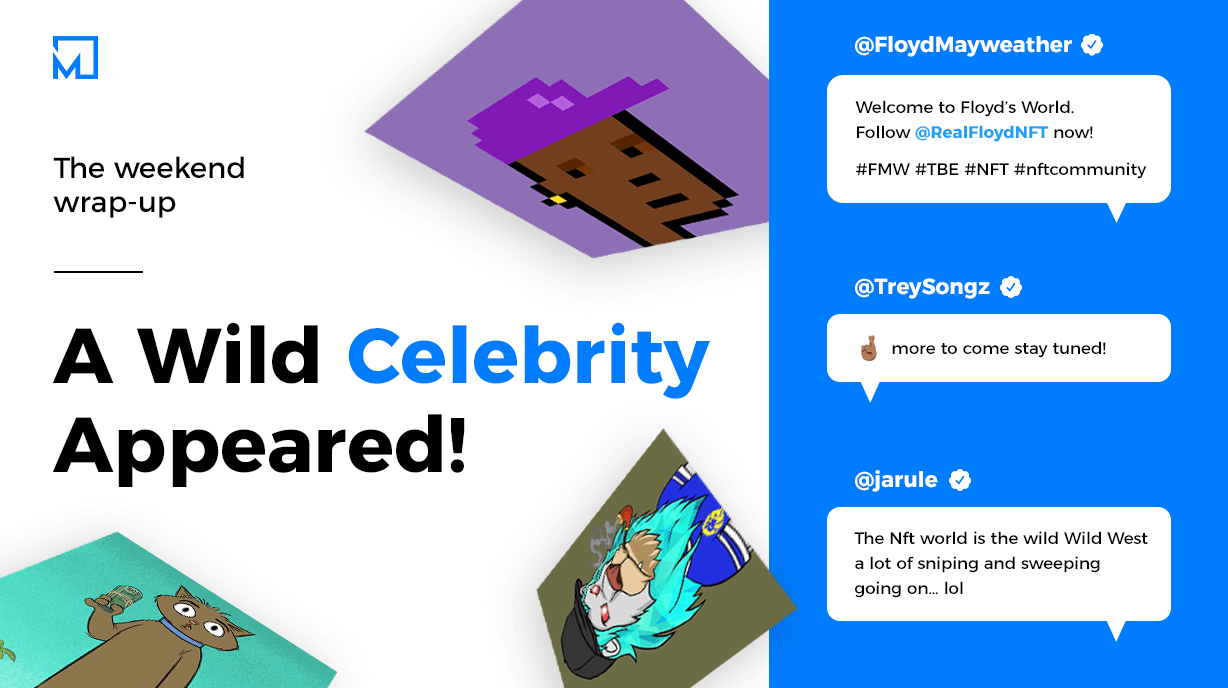 #Celebrities Ape In to NFTs

The NFT market has been fire for months now and people are starting to take notice as the appeal of Social Media Profile Pictures (PFPs) continue to be one of the hottest items. Leading the charge this weekend were some high profile celebrities who started aping in to several new NFT launches.

So what makes this time different? Why might the activity this weekend be a turning point?

Well, this weekend we saw some interesting activity. Celebrities were tweeting about NFTs but not because they were launching their own collections. Instead, this weekend we saw Trey Songz , Floyd Mayweather , Soulja Boy , and even Ja Rule tweeting about and buying PFPs from existing collections. In the case of Ja Rule, he even tagged some of his friends which will only spread the word. This shows a new level of interest in not just cashing in on the hype, but being a part of the movement.

For me, this is a major shift in sentiment. Celebrities using industry PFPs launched by other artists as their actual profile pictures can bring huge awareness to the market. It’s not spurred on by profits, but by actual interest in the art and movement itself.

Only time will tell if they will stick with their newfound NFTs or if some of this is just a marketing ploy for future launches we haven’t yet heard about. Either way, they are bringing mainstream attention to NFTs and we definitely aren’t complaining!

Our first weekend post-london fork is in the books and we have learned a lot. Most importantly? EIP1559 hasn’t made much of a different for the NFT market.

I’ve seen a lot people in various discord channels discussing EIP1559 and it seems like there is a lot of misinformation or misunderstanding of what it is and what it is meant to do.

EIP1559 is NOT meant to lower gas fees directly.

What EIP1559 is meant to do is curb some of the volatility and level out gas fees to make them more consistent and predictable. Unfortunately, we saw this weekend with several major NFT launches that fees can and will still skyrocket, hitting upwards of $200 at one point to mint during the CryptoZunks launch.

While EIP1559 is a good first step, ETH 2.0 is necessary to actually fix the fees problem. To learn more about EIP1559 and what it actually does, check out this article by Gemini which breaks it down quite well.

Farmer Joe is a simple farmer. When not shucking corn he's out scouring the earth for the best NFTs to bring them direct to your wallets.
Tags:
NFTs
WeekendWrap
Celebrities
Share:
More from MarketSquare
View all