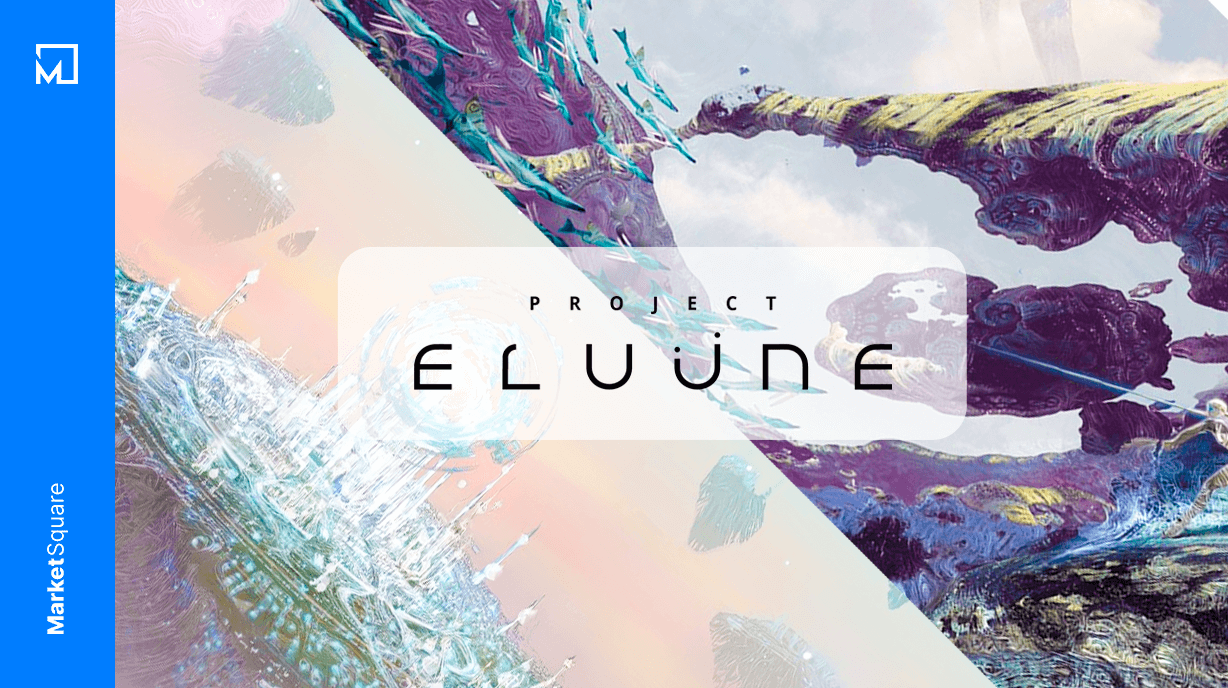 That’s right! It’s time for another amazing Discovery of the Day! MarketSquare is the home of everything Blockchain, DeFi and NFT-related. For your convenience, we bring you some of our favorite projects in the cryptosphere every single day, Monday to Friday! Today we proudly present: Project Eluüne!

#A Sublime Walk Through Celestial Gardens

The universe is impossibly vast, spanning some 93 billion lightyears—and that’s just what we can see. According to leading physicists, it’s still expanding, and one day, millions of years from now, our night sky may be completely devoid of stars.

With this poignant thought in mind, it would be truly amazing to own and hold a star of our very own—in this way, despite the relentless march of time, we could keep our bright and shining friends within arms reach instead of having them move further and further away from us with every passing second.

Project Eluüne takes this notion several steps further by offering NFT enthusiasts a floating island that will be their main point of entry into the Metaverse. As such, these Founder’s StarGardens will serve a very specific purpose in Project Eluüne’s upcoming Play-to-Earn (P2E) game. A total of 7,027 Founder’s StarGardens, secured on the Solana Blockchain, will become available for minting on October 27th, 2021.

By minting a Founder’s StarGarden, users become the owners of playspaces as well as the leaders of the Tribes that populate them. A player’s StarGarden levels up along with its members, permanently improving Play-to-Earn opportunities for anyone on it. When a user owns a StarGarden, they alone decide who is permitted to join their Tribe. Lastly, every StarGarden is an NFT, meaning that it is entirely unique and may be used to a player’s advantage in the upcoming game.

Simply put, StarGardens are not static, lifeless things, but rather living entities that evolve over time. This means that progression content accumulates on a StarGarden and becomes permanent. Thus, the more a StarGarden is used, the more powerful it becomes, thereby unlocking new gameplay options and enhancing its overall value and utility if traded. This mechanic is unique in that, the more an NFT is used, the more valuable it becomes, whereas in most projects, the opposite is true.

Project Eluüne’s upcoming Play-to-Earn game is an MMORPG that is being expertly crafted by experienced designers of successful metagames such as Gods Unchained and World of Warships . In other words, the engineers behind the game are seasoned professionals with years of knowledge in the gaming industry. Even a cursory look at some of the concept art suggests that Project Eluüne is set to be an incredible experience for anyone lucky enough to get hold of a StarGarden (and anybody else since the game will be free-to-play). 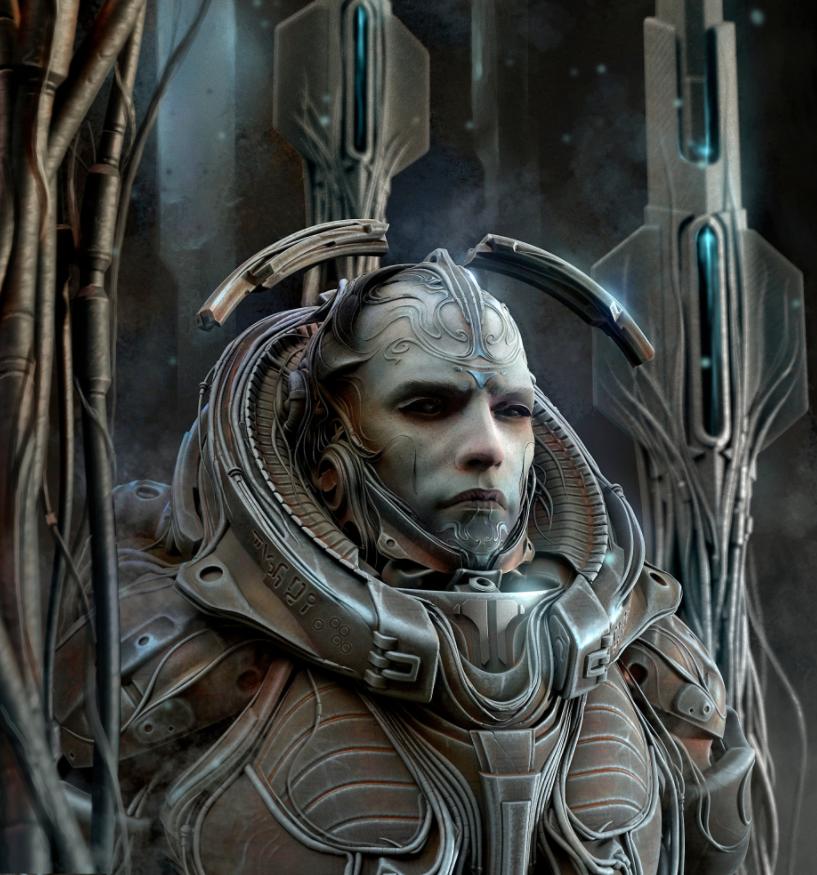 I think Ridley Scott and H.R. Geiger would approve of this character design

Each Founder’s StarGarden possesses unique traits within its metadata, represented by an emblem that appears on the StarGarden itself. Overall there is a total of 20 factions, 39 dormant traits and 5 distinct levels of rarity. 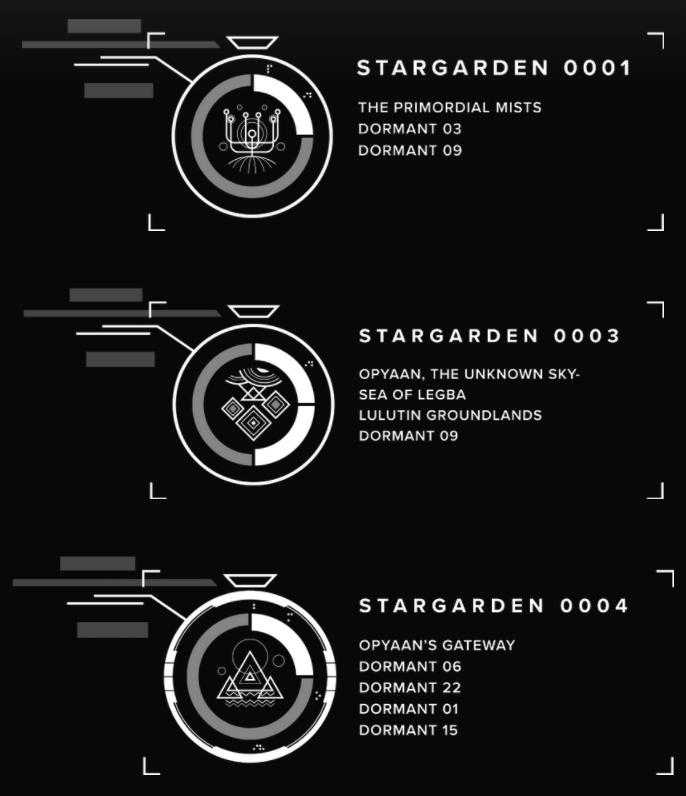 Each StarGarden possesses its own unique characteristics and emblem

On September 2nd 2021, a message was received signed ‘Eluüne,’ confirming that we are not, in fact, alone in the universe. Upon initial review, it seemed that the transmission was some kind of distress call. However, after further scrutiny and analysis, it is evident that the message is actually an invitation and causal gateway to an entirely different dimension. The subsequent decoding of the text has allowed humanity to catch a glimpse of ‘the other side,’ if you will. This event is what led to the revelatory discovery of the StarGardens!

The S.O.S Message received from ‘Eluüne’

A few days ago a teaser image appeared on Project Eluüne’s Twitter revealing a javelin-wielding humanoid seemingly attacking an unseen target. Who (or what) is this mysterious being? Are they one of the inhabitants of a StarGarden? What strange occurrence of physics permits such impossible landscapes to manifest concretely? Hopefully these and many other burning questions will be answered in due course… 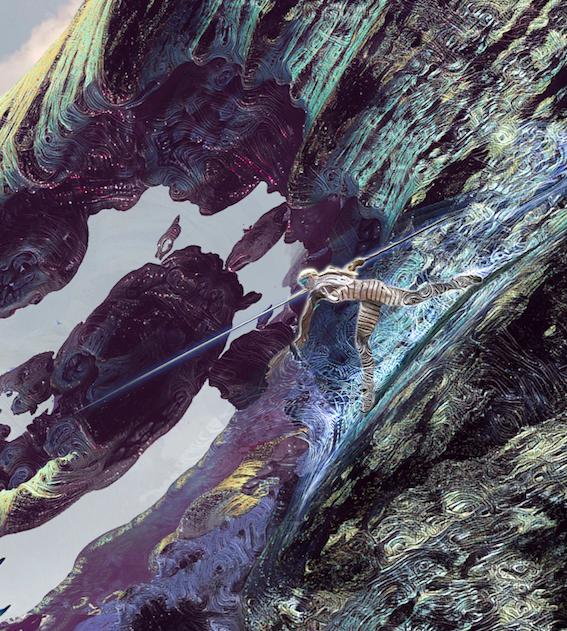 #The Mechanics of Far-Flung Dimensions

Let’s take some time to discuss a few of the features that will be included in Project Eluüne’s upcoming game:

These are just some of the features that have been discussed, and to put it mildly—they sound totally epic! If you want to read the full blog post that dives into Project Eluüne’s gameplay, you can check it out here .

The Project Eluüne Roadmap is divided into 8 Operations which encompass the official mint launch, some intriguing lore, interdimensional missions and much, much more. For your convenience, the details of each Operation are available for review below. 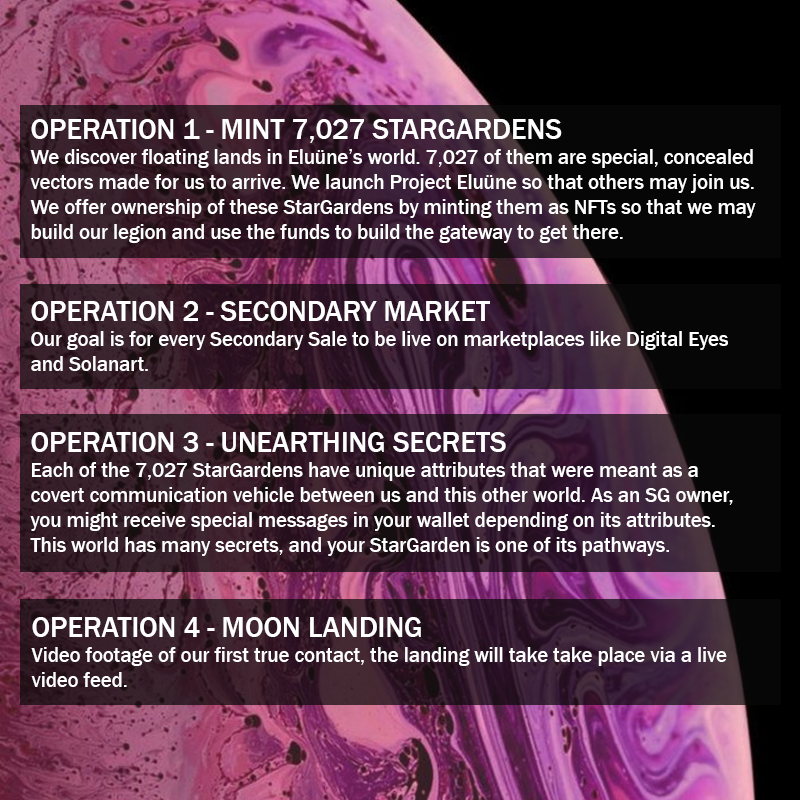 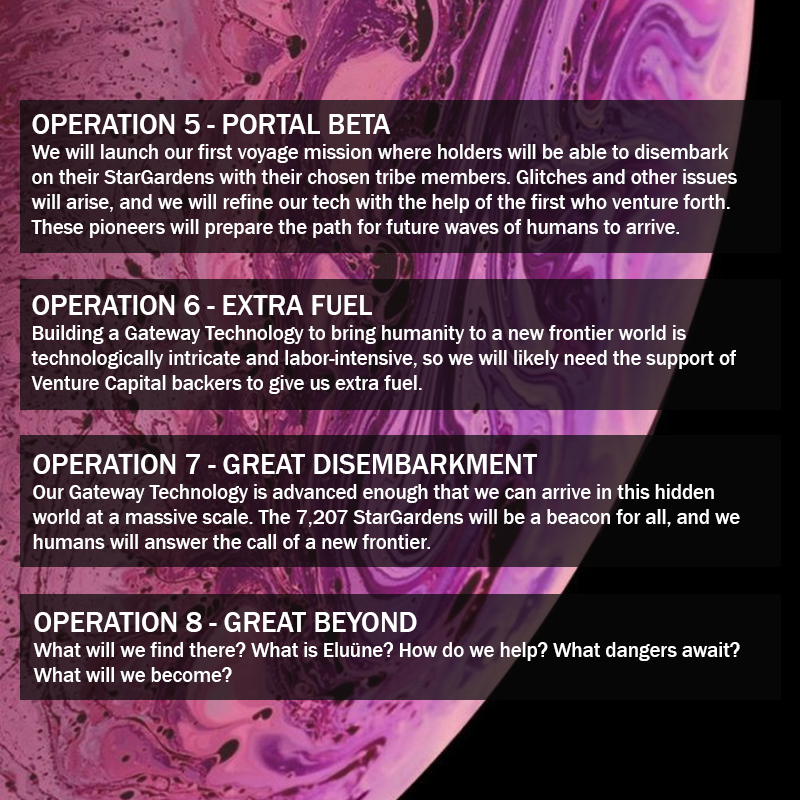 This Roadmap may evolve and is subject to change at any time. Little is known about this new world, and there’s no telling what may be found there. All that is certain is that it’s going to be awesome!

There really is a lot to unpack with Project Eluüne. I must confess that I’m supremely excited to see what the team has planned and just how the Play-to-Earn game will function once it’s available for testing. The concept and Roadmap are very interesting, and it seems like some of the mechanics within Project Eluüne are entirely original and something that I haven’t really heard of before.

Project Eluüne is due to commence its first official Operation very soon! To get your hands on and mint one of the 7,027 StarGardens, head over to their website on the day of their launch and have your wallet and SOL at the ready!

Please Note: Stats are accurate at the time of writing, but be sure to check the original source for the most current information:

Project Eluüne is undoubtedly one of the most unique and innovative projects I’ve seen in this space so far. I have every confidence that their minting will go off without a hitch and am eager to see what the coming months have to offer. Be sure to follow Project Eluüne on Twitter and join their Discord to stay up-to-date with all the latest developments and get a first look at brand new content and features as they are released. That’s it for today everyone…thanks for joining us for another amazing Discovery of the Day! And as Oscar Wilde once said:

‘We are all in the gutter, but some of us are looking at the stars…’