Play-to-Earn in The Walking Dead: Empires! 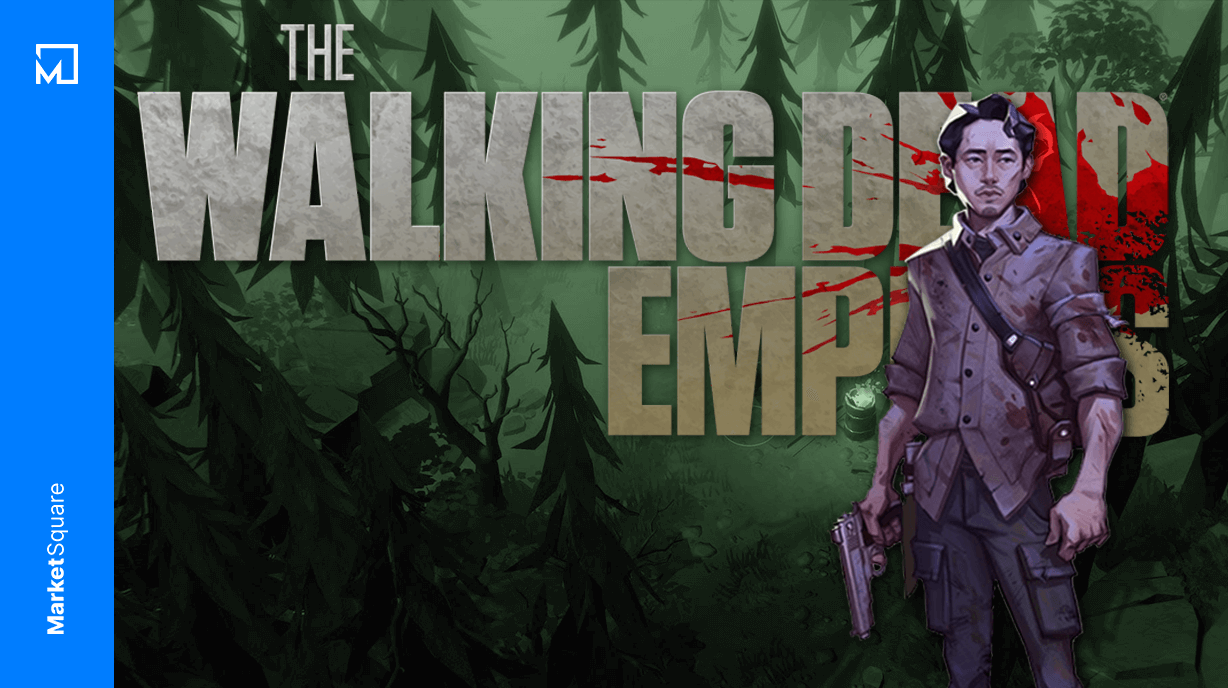 Greetings everyone and Happy Holidays! MarketSquare recently moved into its Open Beta, meaning you can sign up for a profile and explore all the site has to offer! From Monday to Friday we bring you some of the best projects the cryptosphere has to offer. From NFTs and DeFi to Blockchain games and the Metaverse, you’ll find it all right here on MarketSquare! Today we explore an exciting new game title that was recently announced at ‘Into The Galaverse’. We present to you…The Walking Dead: Empires!

#A First Glimpse at The Walking Dead: Empires

The Walking Dead: Empires, alongside some other great new titles, was unveiled last weekend at the Into the Galaverse crypto and gaming event hosted by Gala Games in Las Vegas. Into the Galaverse is a Blockchain Gaming event that features some epic announcements, game releases, NFT drops, and even famous artists like Maroon 5 that performed live, much to the delight of convention attendees. A ton of stuff was going on there, but today we’re going to focus on the new Walking Dead MMORPG by Gala Games, The Walking Dead: Empires. So strap yourselves and have your weapons at the ready, cos this one’s gonna be special! 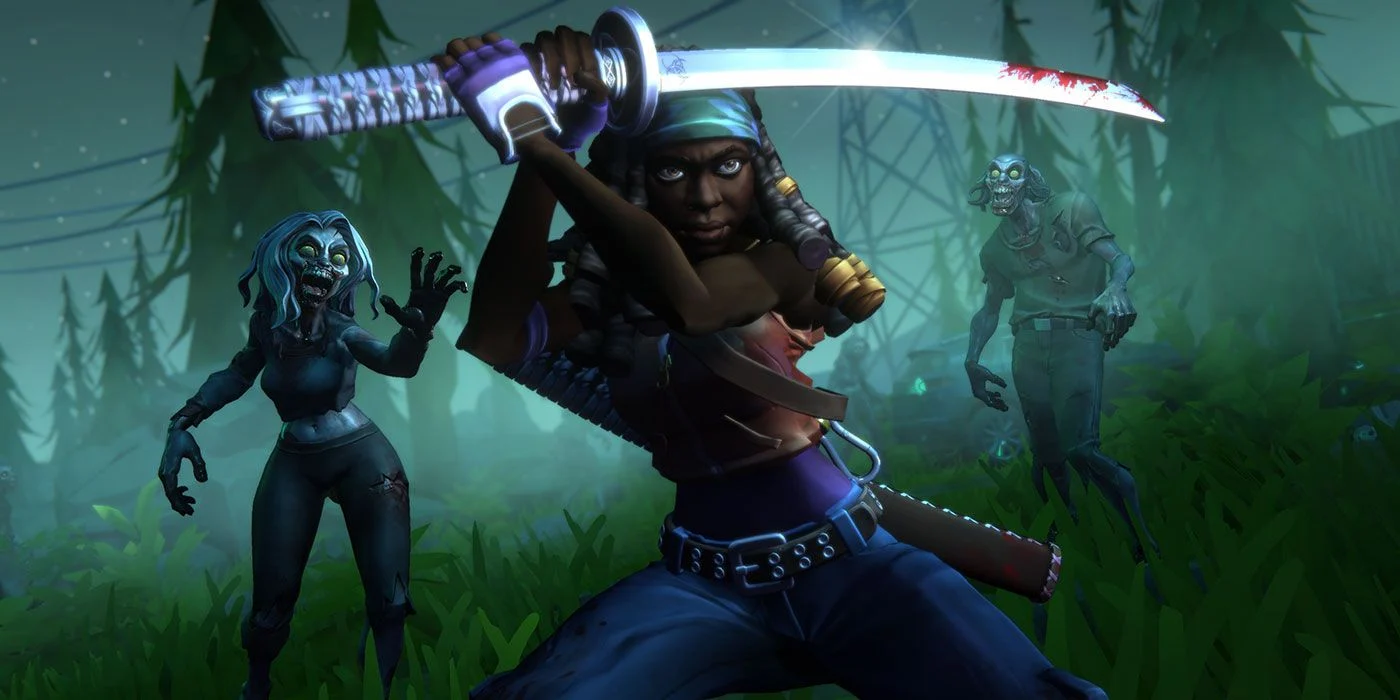 However, the location isn’t the only overlap between the TV series and upcoming game. It was revealed that there’s going to be up to 30 original characters appearing in the game from the show! We’re talking Michonne Hawthorne, Rick Grimes, Glenn Rhee! What a line up! In addition to these characters, the game will include each of their signature weapons including Lucille (Negan’s baseball bat), Sasha’s sniper rifle, Rick’s Colt Python and more! 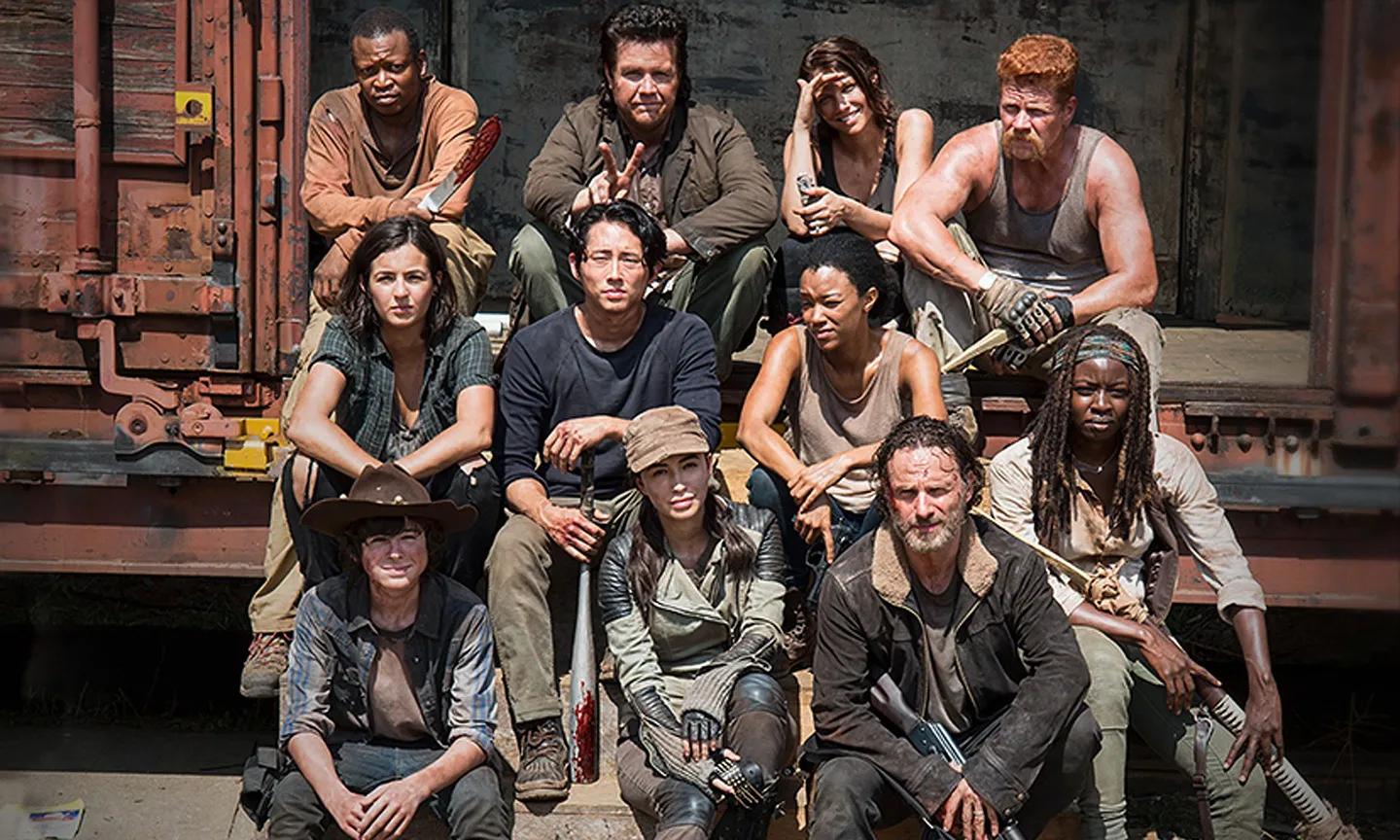 Besides the original characters making an appearance, the game will also include some famous landmarks from the show. Since the game is based in Georgia, it’s confirmed that we’ll see locations like Hershel Greene’s Farm as well as the infamous Prison. Having said this, the developers are also creating a number of areas that are entirely unique to the game.

OK, OK, so we’ve covered enough about the content of the game, so let’s take some time to dig into its mechanics and what you’re actually going to be able to do. Let’s take a look…within the game you’ll be able to:

Essentially the way the game works is summarized in its title—you build your own Empire within The Walking Dead Universe! Now because this is a Blockchain game, Land, NFTs & crypto are all a major part of its DNA, so let’s discuss the way Land works now…

The map will be split-up into ten different regions, each of which will have a city in its center. There’s will be a number of fast travel spots that will allow you to instantly hop from one city center to another. Convenient! 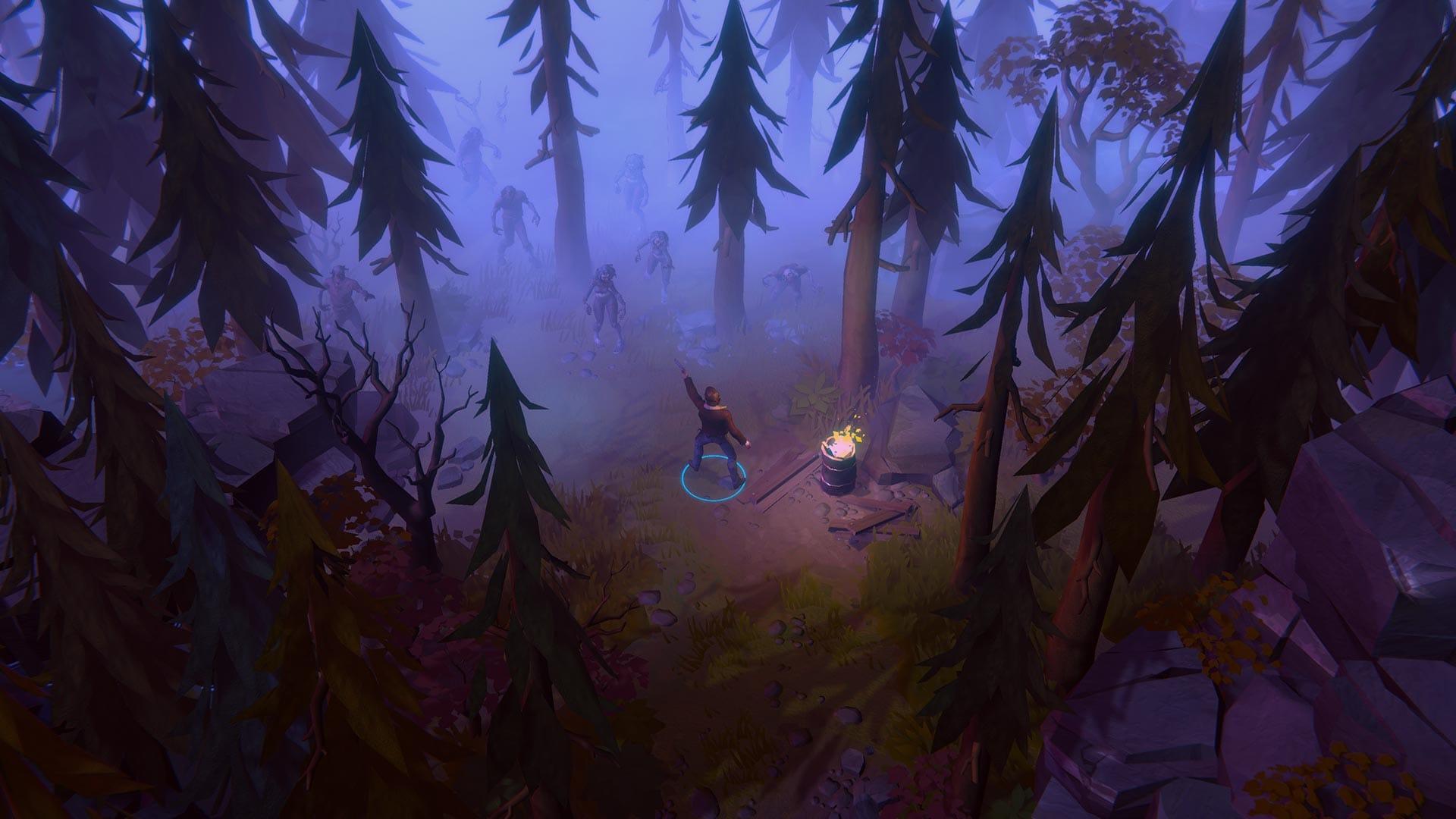 Over the course of the last year, we’ve seen some awesome Blockchain games come to life including Blankos Block Party, Town Star, War Riders, The Sandbox, and Mirandus. A common mechanic in games like The Sandbox and Mirandus is the ability to purchase LAND, giving users the ability to create and build experiences as well as invite people to their virtual real estate.

Walking Dead: Empires is doing something similar. In the game you will be able to develop your land and make it a safe place for others to seek refuge or a juicy target for your enemies to attack. So if you want to build the next Alexandria or Hilltop (like in the TV show), well…you can! Either way, you benefit if your territory becomes a hub for action.

There are six (6) tiers of rarity—the higher the rarity of the land you own, the bigger it is, meaning it can support more players, house more structures and so on. You’ll earn rewards and improve your land when others buy, sell, fight, or kill on it. To purchase land, you can head over to The Walking Dead: Empires Gala Games page! Each piece of land is an NFT (Non-Fungible Token) that gives you complete and true ownership over your real estate. 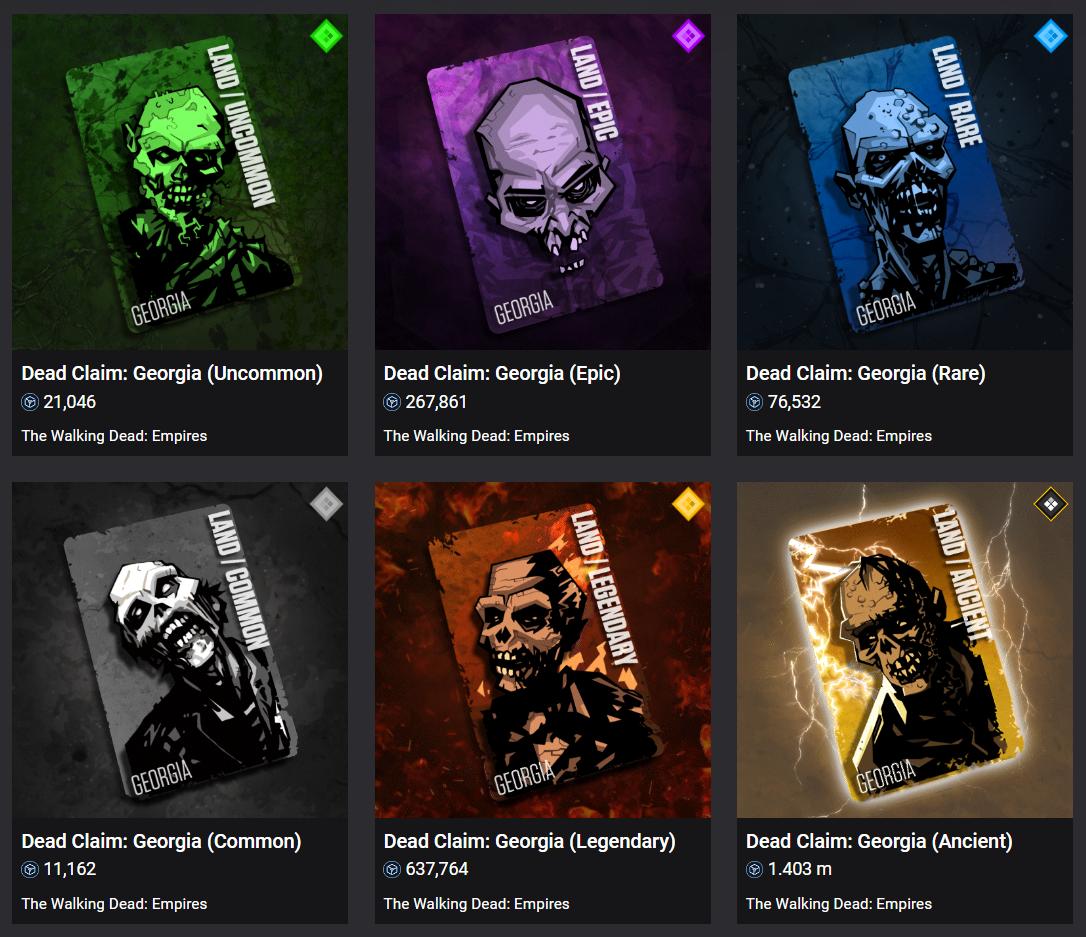 Dead Coin is the game’s primary utility token that will be used when facilitating purchases of items, land, labor and more. The Walking Dead: Empires is also going to have a free-to-play mode, allowing anyone to participate and enjoy the Play-to-Earn (P2E) mechanics. Anyone will be able to jump into the game and start earning Dead Coin immediately! There will be markets in the game where Dead Coin serves as the currency for all trades as well as purchases of in-game items and resources. Pretty nifty! 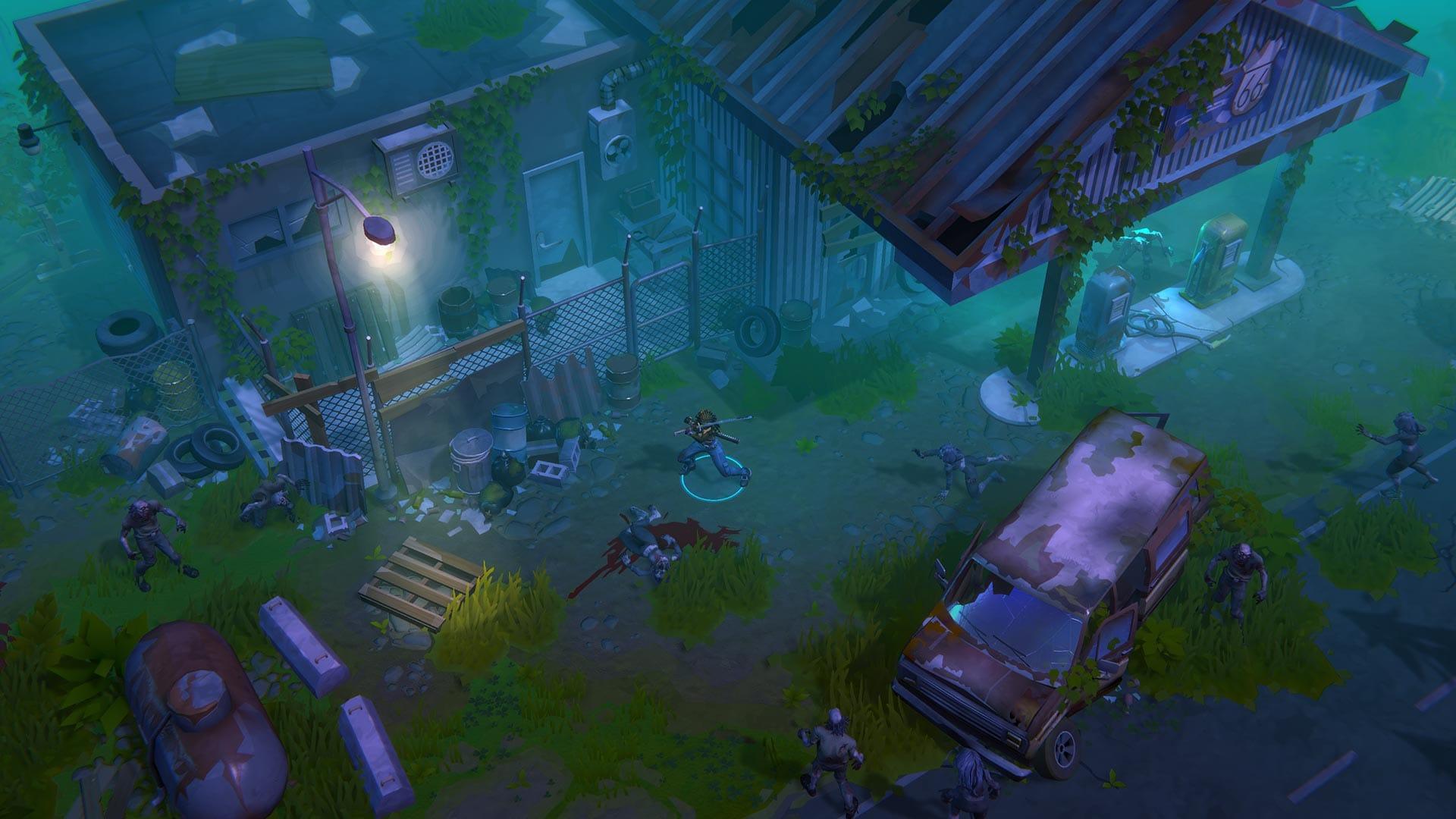 #Fight the Dead, Fear the Living!

It’s thrilling to see such popular IP like The Walking Dead enter the Blockchain space, and we can only hope that more companies and popular IPs will follow suit (and they almost certainly will). The talented and innovative designers behind The Walking Dead: Empires are focused on having the community help build an immersive and visceral experience by listening to any and all feedback received as each segment of the game releases. I highly recommend you follow both Gala Games & Ember Entertainment wherever you’re able to in order to stay up-to-date with the latest news and info concerning The Walking Dead: Empires’ development.

Thanks for joining me in today’s Discovery of the Day! What do you think about The Walking Dead getting in to Blockchain? Let us know on any of our social media channels…we’d love to hear your thoughts! If you haven’t signed up for a MarketSquare profile yet, make sure you get to it so you can check out all your favorite projects and even leave a review or two! That’s all for now. Take care of yourselves and don’t forget to check for zombies before venturing outside! Adios!

Reece is a video editor and Blockchain Games researcher at MarketSquare.io. He moonlights as a twitch streamer and can often be found slaying wither skeletons in Minecraft when not hunting for the latest NFTs.
Tags:
NFTs
PlaytoEarn
Metaverse
Share:
More from MarketSquare
View all