Own the Galaxy in Star Atlas 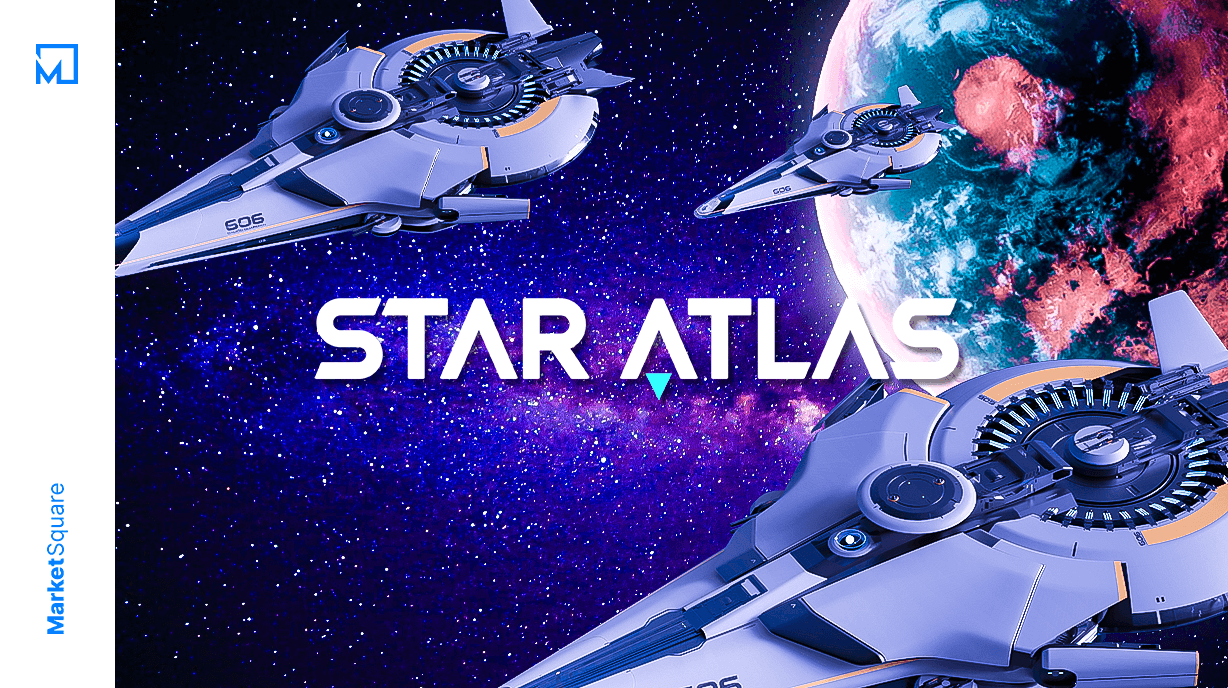 Non-Fungible Tokens (NFTs) are rapidly growing in popularity, and Blockchain games are quickly becoming a major drawcard for members of that community. With this in mind, one game seems to be gaining a lot of buzz, and get this - it’s not even available to play yet! Let’s take a closer look at the highly anticipated Star Atlas, and what makes it such a hot ticket item…

I undock from a space bay with my newly christened spaceship, obviously named the S.S. Spizicus Maximus. I survey the endless void of space, yet also seemingly endless possibilities…at least, that’s what I imagine it’ll feel like when I can actually play this game. Even without knowing much about it, just take a look at the concept art!

The Council of Peace Station. Might need to plan a raid on that place. Peace in space is not the way I plan on playing…

In any case, let me justfy my obvious pre-launch fanboying. I have been a long-time player of massively-multiplayer online (MMO) games since World of Warcraft came out back in 2004. One of my other all-time favorite games that was also created by Blizzard Entertainment (you know, before that whole Activision purchase that totally ruined the company?) is Starcraft and its successor Starcraft II . Space battles? Alien races? Galactic domination? Bring it on! Hey, this is starting to sound familiar…

I have spent thousands of hours playing World of Warcraft and Starcraft II, and the one thing I have always hoped for has potentially arrived with Star Atlas. When I first heard the concept behind Star Atlas, I thought, ‘You’re telling me someone made an MMO centered around spaceships and digital ownership through the use of Blockchain? Pinch me, I must be dreaming!’

Star Atlas aims to be the first AAA-quality space-age MMO Metaverse game in the Blockchain space. It seems to have it all: three different factions competing to control the galaxy while battling for precious resources, countless adventures in uncharted space, and of course, no galactic empire would be complete without some good ol’ political instability. You can choose to join a faction or even form your own. The craziest part of all is that your actions directly influence the entire Metaverse and course of the game!

Oh yeah, and everything you acquire, pillage, secure, and mine can be converted to real money. That may be the craziest part actually. I definitely buried the lead on that one. Anyway, I could theoretically pay my rent from harvesting a star. I can only speculate on payout values at this point, but my personal analysis based on hopes and dreams is that…yes, I want to pay my rent from a Blockchain game. And I want this one to be it.

#Eve DiD iT FiRsT!

Yes, yes, I understand those of you who are reading this and are like, ‘Well Spizzo, there is actually a giant space game that already exists and has real money assets: Eve Online .’ 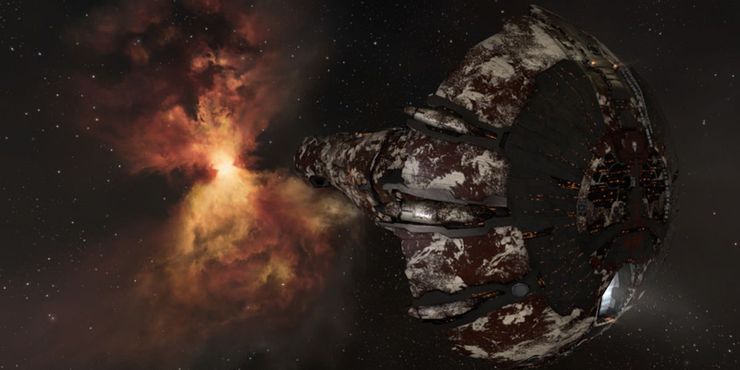 This ship is worth a whopping $5,000 USD. I may have one and I may not, but it’s cooler to keep you guessing.

Imagine that being worth $500,000 USD (which is definitely a possiblity considering the massive boom in the current NFT market). Is Eve Online a space age MMO? Yes. Does it give you virtually endless options on what you can do in the game? Yes. Until now, Eve has been an uncontested solo act in the world of MMOs as most games in this genre cater to medieval or J.R.R. Tolkien -style gameplay, not spacefaring sci-fi types.

Star Atlas is joining that realm with one massive difference (pun intended…get it? Massive? MMO? Forget it). It has digital ownership built directly into its design, something I personally think is one of the coolest things to come out of the Blockchain space. 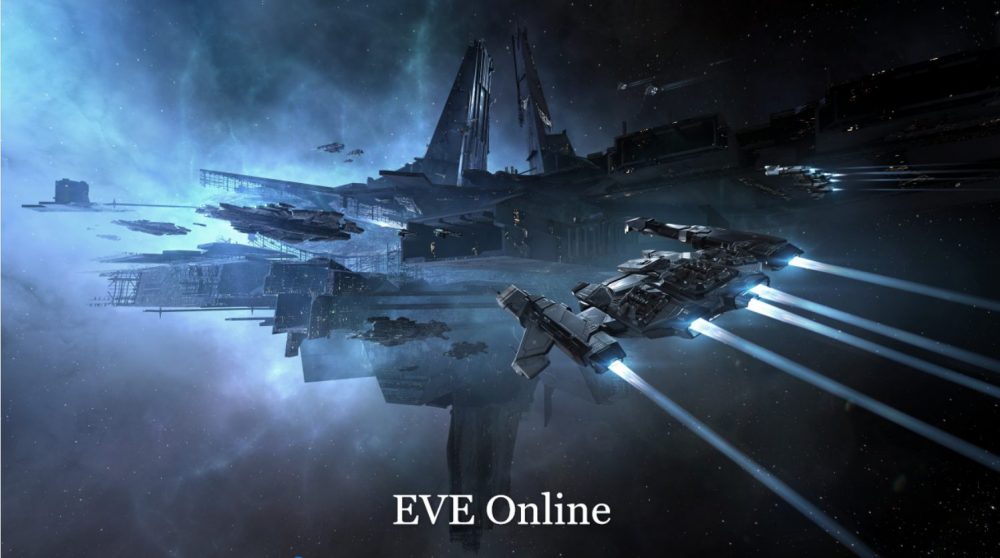 Eve Online is definitely an awesome but simultaneously unforgiving game. Think Counter-Strike: Global Offensive has a tough learning curve? Buckle up if you plan on playing this beast for the first time…

#What’s the Hype All About?

Well the hype seems pretty obvious to me, but what makes Star Atlas so special, is it’s not just the ships that retain value. It’s everything. Star Atlas is built on top of the Solana Network and allows users to create or discover items that can be minted into NFTs. You can also choose to place your ship next to a star and harvest actual money from it. Be careful though: you never know when the Spizicus Maximus might show up and attack your ship. Get some!

The style and real world value attached to this game open up entire new possibilities regarding how people play it. If I knew I would actually lose a bunch of money for losing a fight, I’d think twice about actually engaging…but it would be fun nonetheless. I imagine factions or alliances will end up forming and even create harvesting divisions where people share profits for protecting mining operations. It actually reminds me a lot of the entire crypto mining community, just with the extra aspect of digital space pirates added to the mix.

Where I plan on stashing my bounties. Yes!

One of the things that also stood out to me when I was first introduced to this incumbent beast is the graphics. For a while now I have found more and more Blockchain games to be a little more on the basic side in the graphics department. Star Atlas has opted for a different route, or at least that’s the way it seems to me. 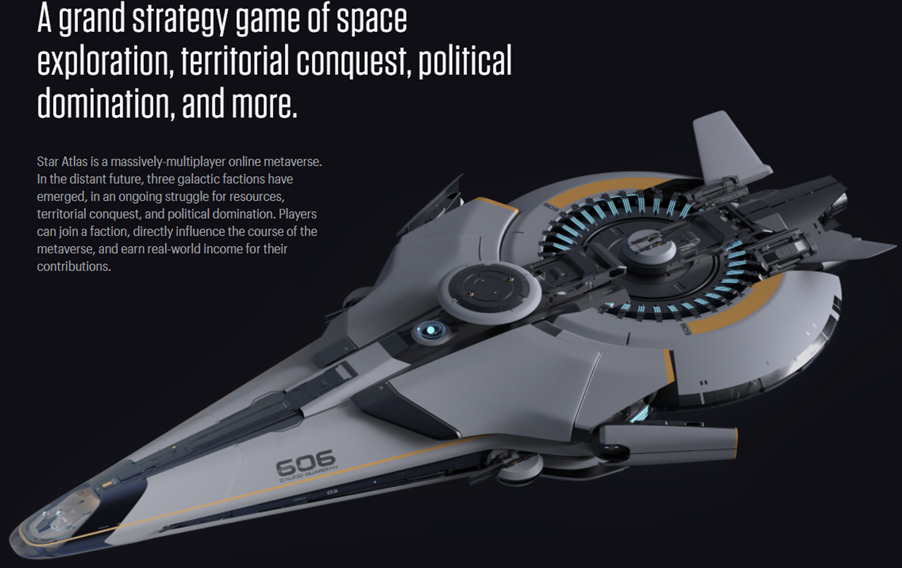 I mean look at the ship in its 3D glory. Maybe this is actually the S.S. Spizicus Maximus…AHHH so many choices!

Recently Star Atlas unveiled an amazingly cool E3 -worthy teaser trailer which, after I witnessed it, was left feeling like, ‘OK, so when can I play?’

Now, I know there isn’t any actual gameplay footage yet…but come on, who watches this and doesn’t think it will be cool? Star Atlas offers so much more than anything else on the market at the moment. I look forward to being able to play the day it comes out. I might just have to call in sick to work. Who am I kidding? it’s research, and I’m ready to learn!

The only real question is ‘When?’ as the official launch date, April 24th 2021, came and went with no starship piracy to be seen. I remain hopeful though. As a die-hard fan of Blizzard Entertainment, I am pretty used to missed launch dates, and 9 times out of 10, I’d rather have the developers take longer if they need to. It’s either that or it’ll be Cyberpunk 2077 all over again…

YouTube
Spizzo is a videographer, writer and gamer. He spends his nights dominating tug of war with his dogs, popping domes in games, and preaching the good word of his favorite altcoin.
Tags:
NFTs
Star Atlas
Gaming
Share:
More from MarketSquare
View all