NFTs by The Prince of Darkness - CryptoBatz 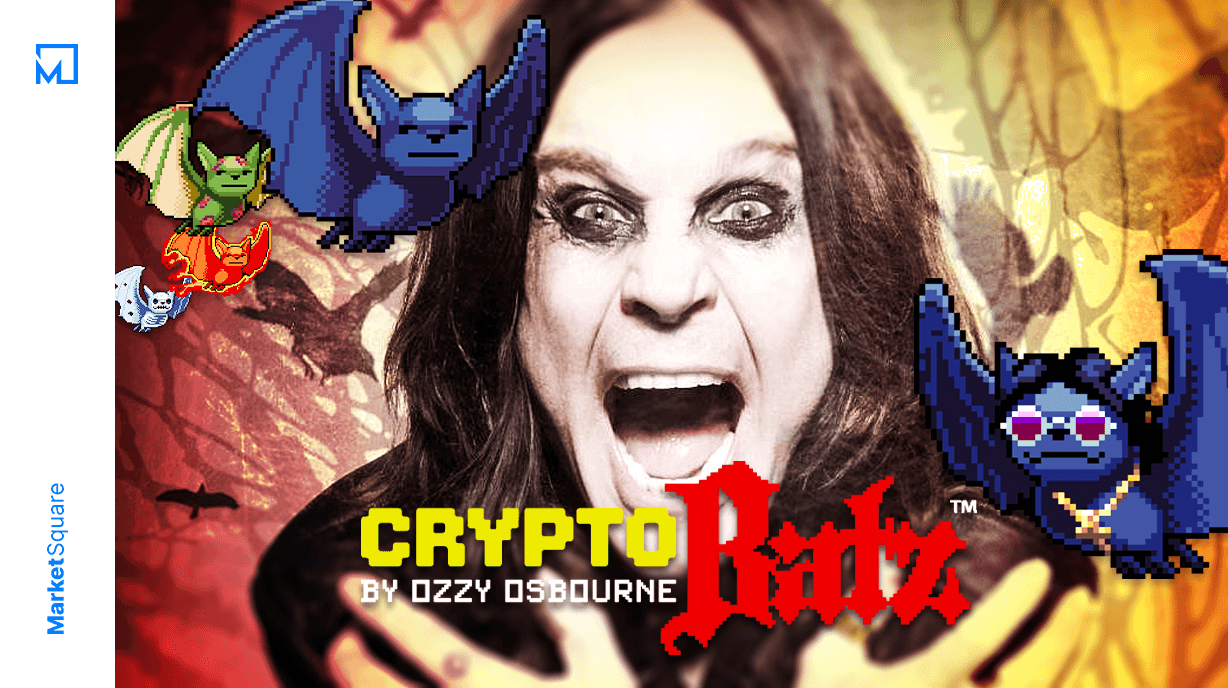 Hello and welcome to today’s Discovery of the Day! MarketSquare recently moved into its Open Beta, meaning you can now sign up for a profile and enjoy all the site has to offer. From Monday to Friday we bring you our Discovery of the Day series of articles in which we showcase some of our top picks from across the cryptosphere. Whether it’s NFTs, Blockchain gaming or the metaverse, you’ll be able to find it all right here on MarketSquare! Today we take a look at a project by someone famous for being the Godfather of Metal…yup, it’s the one and only Ozzy Osbourne with his NFT project, CryptoBatz!

#The Prince of Darkness

No no, not that Prince of Darkness. I mean Ozzy Osbourne, the frontman and vocalist of legendary Metal band Black Sabbath. I owe a whole lot to these pioneers of the slow, chugging, doom-infused brand of music that has since exploded in popularity and splintered into every conceivable sub-genre under the sun—Death Metal, Black Metal, Thrash, Grindcore, Power Metal, Doom…the list of artists and musicians Black Sabbath is basically responsible for bringing into being is virtually endless.

John Michael ‘Ozzy’ Osbourne was born on December 3rd, 1948 to Lillian and Jack Osbourne. 21 years later, along with Tony Iommi, Geezer Butler and Bill Ward, Ozzy would form Black Sabbath, widely regarded as the world’s first-ever Metal band. Their debut album Black Sabbath released on February 13th 1970, and in 2019, it was estimated that the band had sold a total of 70 million albums from across their discography over the five decades of their existence. 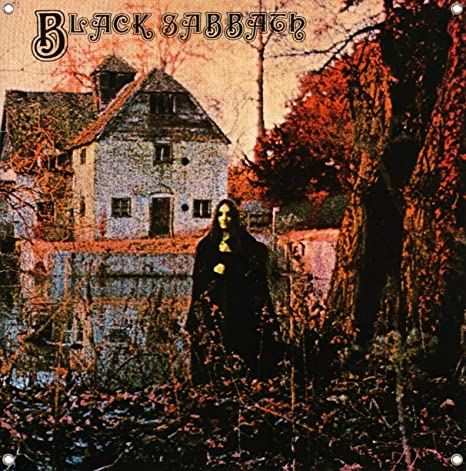 Now I could obviously go on about Ozzy and his legacy for hours and hours, but that’s not the point of this article. Believe it or not, The Prince of Darkness, now (somehow?) 73, is into crypto and Blockchain technology! Say what!? That might just be the coolest thing I’ve ever heard! Ozzy isn’t the only metalhead into NFTs though…in fact, my good pal Simon Downey told me about Megadeth and their NFTs, which you can view right here. Seems like a lot of top Metal bands and artists are embracing NFTs, and in today’s Discovery of the Day, you’ll see that Ozzy himself is more than into it—he’s heading up his own NFT project!

#Straight off the NFT Bat!

Whether you’re aware of the story or not, on January 20th, 1982, Ozzy Osbourne was busy performing at a concert in Des Moines, Iowa. One of the audience members decided to sneak a dead bat into the concert and threw it on stage in front of Ozzy. Mistaking the bat for a toy, Ozzy picked up the deceased creature and promptly…bit off its head.

Almost 30 years since the original bat head chomping, Ozzy has launched CryptoBatz, a collection of 9,666 (that number is no mistake) NFT Bats that dwell in the caves of the Ethereum Blockchain. Yes, this delightfully diabolical collection is built by ‘a team of NFT obsessed nerds known as Sutter Systems.’ Seems like the team behind CryptoBatz is a formidable one that is also pushing to innovate and bring new utility to NFT fans through this project that’s being overseen by Ozzy Osbourne himself!

I see an Ozzy Bat, a Vampire Bat, a Skeletor Bat…blink and you’ll miss ’em!

Hold on a cotton pickin’ minute…just what’s going on with this project? So like Herbert West from Re-Animator (1985), the members of Sutter Systems are a little more on the, shall we say, ‘mad’ side? So in an effort to create an NFT project that truly stands out from other collections, the team spent a great deal of time and energy developing something that would effectively imbue each and every CryptoBat with a truly unique power. What is this power, you ask? Well, CryptoBatz will be able to uh…‘bite’ an NFT from another Blue Chip project, thus leading to the creation of a ‘MutantBat’ that possesses the digital DNA of both tokens! 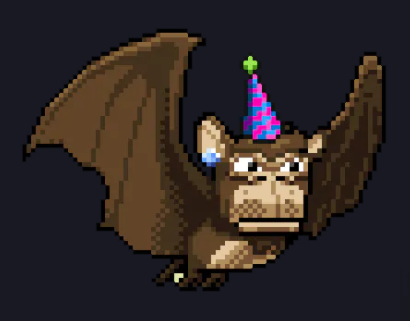 Hmmm, now where have I seen this MutantBat before?

Now there is a catch here, so pay close attention. A CryptoBat can only bite once, so before letting your CryptoBat bite an NFT, think very carefully about what you choose, because this will ultimately determine what kind of MutantBat will be created. In addition, if you want your CryptoBat to bite a ‘Victim,’ you will need to hold that Blue Chip NFT in the same wallet as your CryptoBat. Biting utility isn’t active yet but will be enabled soon after the public mint takes place (date TBD). At present, the list of Blue Chip ‘Victim Projects’ your CryptoBat can bite includes:

#Doing the Maths on the Batz

Yes, there is indeed more to CryptoBatz than meets the eyes. In terms of the composition and design of the CryptoBatz, the Fibonacci Sequence (or Golden Ratio ) has been employed to ensure that the Batz, while dark, spooky and outrageous, are pleasing to look at. Also, all the traits that make up the CryptoBatz were selected by Ozzy, so every single minted CryptoBat will be truly special since they’re the product of Ozzy’s creative choices. That’s seriously awesome!

So those individuals who hold a CryptoBat will be eligible to participate in an epic treasure hunt! Right, so remember how I mentioned that CryptoBatz can only bite once? Well, if you’re lucky enough to find one, AncientBatz are capable of biting up to ninety-nine (99) times, giving them the unmatched ability to breed a whopping 99 MutantBatz! Wowzers!

Every one of the AncientBatz has been custom designed by some of the most renowned and talented artists in the world, so anyone who manages to get their hands on one not only has a unique NFT with a huge amount of utility, but a piece of digital art that is virtually one of a kind. Finding such rare and powerful Batz won’t be easy though since the team has scattered the AncientBatz across the face of the planet. Who knows? An AncientBatz NFT may be in a river, high up a mountain or hiding in the recesses of a sewer. In others words, these special Batz really aren’t easy to find—at all.

Every week clues and hints will be provided to the most engaged and active members of the CryptoBatz community, gradually revealing the locations of AncientBatz, thus making them easier to find as time goes by. If someone is lucky enough to find an AncientBat, they will simply scan a QR Code that reveals a special wallet that can only be unlocked using that person’s CryptoBat. In time, an interactive world map will be released, so stay tuned for more details!

The CryptoBatz Roadmap is divided into 5 different phases or chapters. Take a look at our reworked design of the current Roadmap: 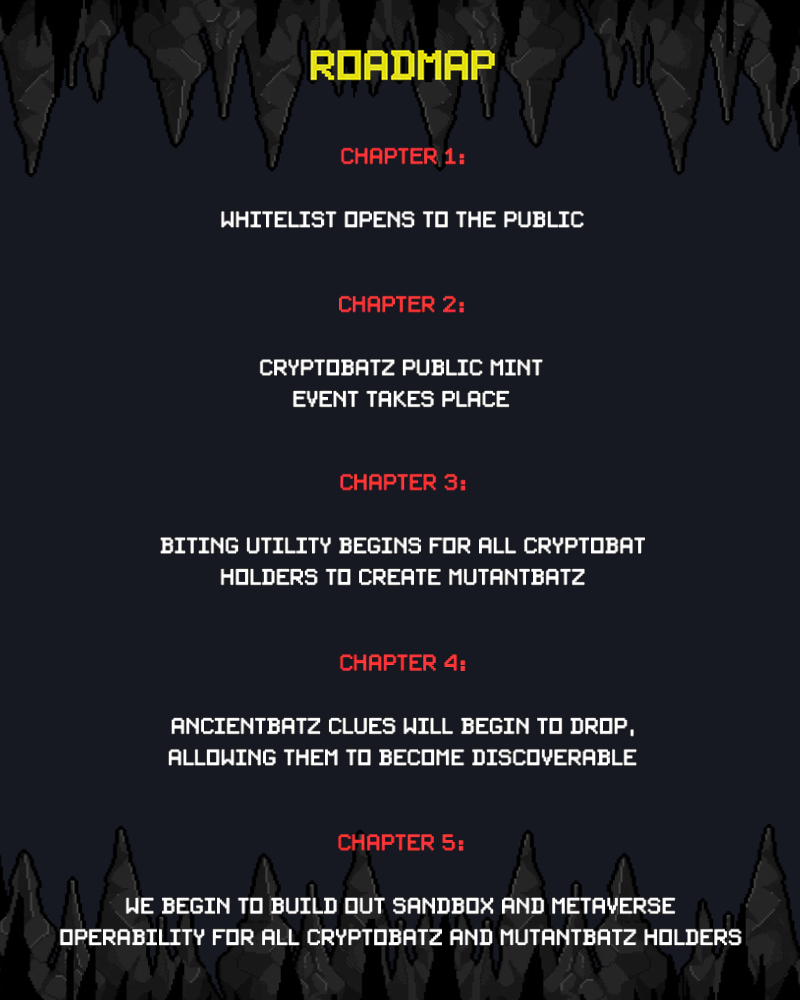 If you want to see the Roadmap in its original form, click here

Besides The Godfather of Metal himself, Sutter Systems is made up of six core members (according to the CryptoBatz website at least):

#All Aboard the Crazy Train!

OK, so the question is ‘Wen CryptoBatz?’ Well, if you want to find out more about the Mint Date, you’ll have to join the CryptoBatz Discord and get all the info you need there. You can also check out this quick FAQ provided on the website below: 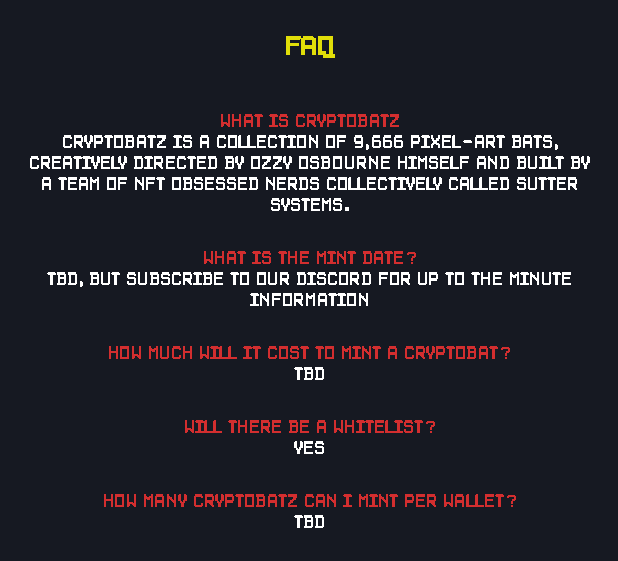 And that about does it for today’s Discovery of the Day. If you want to learn more about CryptoBatz (and you totally should), follow them on Twitter and join their Discord so that you get all the latest information as and when it’s released. You can also follow Sutter Systems on their Twitter since they’re the NFT studio behind CryptoBatz and deserve some love and attention too.

Before we close off, take a look at this awesome fan-made 3D CryptoBat…it’s seriously sick!

What if @CryptoBatzNFT were 3D! 🦇🦇🦇
I've made a fanart for my beloved project, Hope you enjoy it BatZ gang, Let's Legendary Rock & LFG!!! 🤘@OzzyOsbourne@DannyPhantomNFT@SutterSystems#cryptobatz #CryptoBatzNFT #fanart #3D #NFTs pic.twitter.com/IgKX7CFi7z

Thanks for joining me today fam! What do you think of CryptoBatz? Be sure to let us know on any of our social media channels. If you haven’t signed up for a MarketSquare profile yet, make sure you do so that you can receive all the latest news and enjoy all the site has to offer. Until next time, have an awesome one, keep it heavy, and keep on rocking out! Horns up!

Brynn is the Content Manager at ARK.io, lead DeFi writer for MarketSquare and die-hard metalhead. When not researching yield farming, he spends his time crushing demons in DOOM or shredding his favorite axe.
Tags:
NFTs
Discovery of the Day
Ozzy Osbourne
Share:
More from MarketSquare
View all