How Does Building MarketSquare Help the ARK Ecosystem? 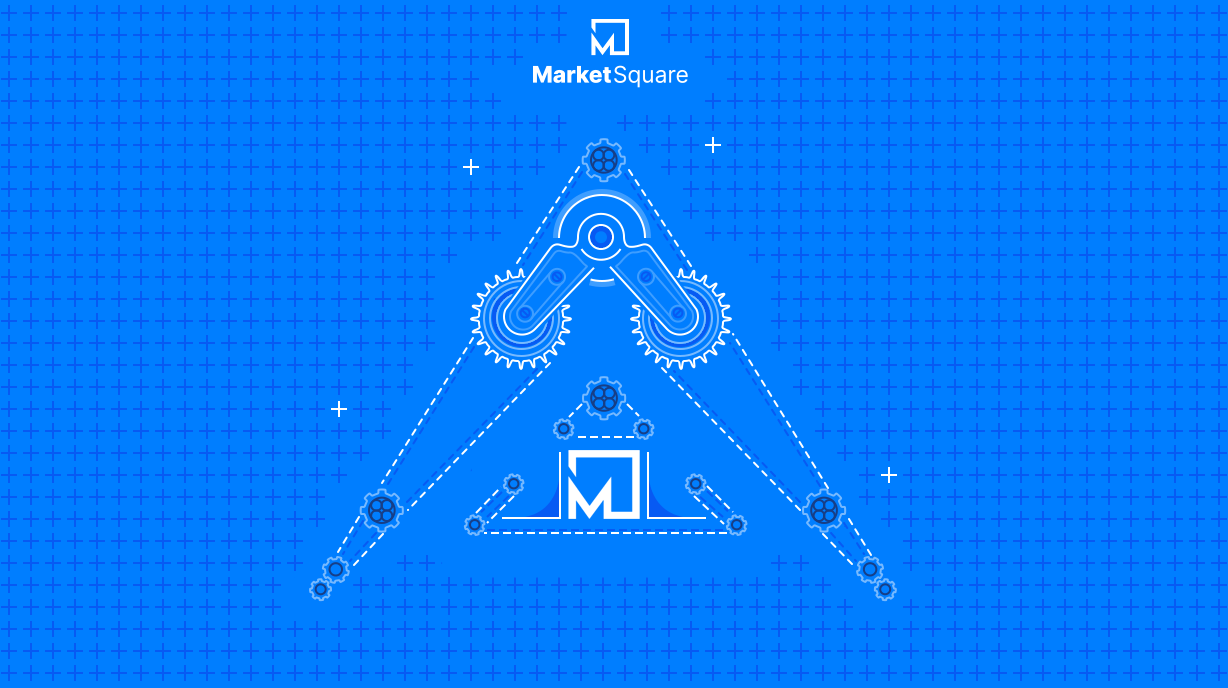 In 2021, the team at ARK.io soft-launched MarketSquare, the new platform that allows anyone to discover and connect with their next favorite Blockchain project. However, it covers the whole Blockchain and crypto industries, not just the ARK Ecosystem. Now if that’s the case, why build it at all? And how is this good for ARK?

#MSQ is in Our DNA

Since its inception in late 2016, ARK has focused on harmonizing the industry so it can put up a united front and tackle the centralized status quo. The original 27 Founders of ARK believed that, so long as tribalism keeps the industry divided, it will be all the more difficult to take on the existing global players.

When asked about MarketSquare, ARK.io Co-Founder, Board Chairman, and Chief Strategy Officer, Matthew DC, had this to say:

Crypto is a community as a whole, not necessarily just ARK or just Ethereum or just Bitcoin. Too much in this industry, people have focused on ‘well, I’m a Bitcoin person and that’s it,’ or ‘I’m an Ethereum person.’ Everybody is focused on one technology, but really it’s about pushing the industry forward as a whole. The idea behind MarketSquare was to build something that was for companies, projects, and startups to build community together as an industry

From the beginning of ARK, the Founders promoted a culture where good people doing good things in Blockchain are always welcome.

In the ARK Whitepaper , we discussed the implementation of marketplaces where people can browse and discover what they are looking for like cool plugins or reliable node operators. As we continued to make our way through our roadmap, we determined that these marketplaces should really be covering the whole industry, not just the ARK Ecosystem. Doing it that way actually fit our mission statement more closely than doing it only for ARK, because ARK has been all about uniting the industry since day one.

This ethos has actually been a major driving force for why I got so involved with the ARK project and ecosystem, even before I joined the team. When I first got involved in the space, learning about all the different coins other than Bitcoin, I found a lot of tribalism, and in extreme cases, almost a cult mentality. People were quick to clutch onto the coin they are familiar with the most and blindly challenge or reject different ideas. I wasn’t gelling with that.

The ARK community, on the other hand, seemed very welcoming of other cool things going on in the industry. It was interesting to learn that ARK was hosting AMAs for totally separate projects as far back as 2017 . Woah! A Blockchain project that loves to hang out with other Blockchain projects? I can get used to this!

As I saw MarketSquare evolve throughout development, I viewed it as something that ARK was actually best suited to execute. MSQ is in our DNA.

But how does it help ARK?

My take is that ARK’s ethos is actually a breath of fresh air in the space and has been for years. As a result, I believe the ARK community can grow because of it, not in spite of it. This comment on one of our MarketSquare videos about Hive says it best: 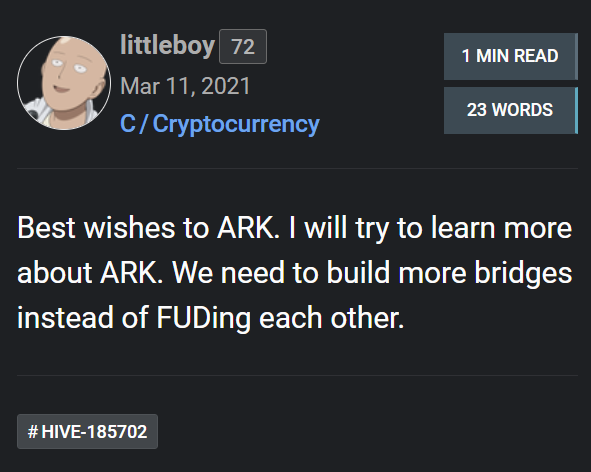 Comment on a Hive video we made on 3Speak

People are definitely catching our drift and want to explore ARK deeper because of it. With MarketSquare serving as a real-life platform aiming to unite the industry, I see MarketSquare as a tangible embodiment of ARK’s intangible personality.

The ARK Ecosystem can benefit as a direct result of forming meaningful, lasting relationships with other players in the industry through MarketSquare. The recently-appointed President of the ARK business entity, Ray Alvarez, has seen this first-hand.

A stand-out example of how relationships through MarketSquare have helped ARK increase its reach is Travala.com, the industry’s leading crypto-friendly travel booking platform. Even though ARK had already been working on interfacing with Travala’s team to accept ARK for their 3 million+ travel and leisure products, the advent of MarketSquare accelerated the formation of that relationship drastically. After learning of MarketSquare, Travala went on to become one of the first partners on the platform and started accepting ARK on their platform with an announcement. Today users can use the ARK coin directly to book flights, hotels, and experiences on Travala.

At the time, Ray’s title was not President, but Strategic Partnerships Manager. He was largely responsible for garnering partnerships and relationships for both ARK and MarketSquare (he still does, albeit a bit more presidentially). When asked how MarketSquare speeds up and improves the partnership process, Ray had this to say:

MarketSquare is one of the products we are really focusing on at ARK. The entire platform is built for the entire crypto community, and through our talks with various partners, we’ve also had the opportunity to work with them on ARK-related initiatives. MarketSquare provides a great pipeline for partners that are looking to get more involved in our products, whether it’s Payvo or Platform SDK

You could say that projects that join MarketSquare get automatically ‘enrolled’ in our outreach efforts for the platform as a whole. We produce content for partners in the form of articles and videos, work to drive traffic to their Profiles, and even feature them in our own media campaigns and strategies. By extending a helping hand to help other projects and entities reach more people, it becomes easier to have conversations about how ARK technology may be able to help them with their own project goals.

After all, a well-known mantra in the ARK community since the beginning has been ‘ARK has no competitors, only future partners.’

MarketSquare is a separate sub-brand and product built by the ARK team, and there’s a specific reason it was not named ‘ARK Marketplace.’ MarketSquare is both a coin-agnostic and platform-agnostic product, where each project can shine, build community, and collaborate with each other, regardless of whether it is powered by ARK technology or not.

As the overall awareness and reach of MarketSquare grows, we can leverage it to educate people about ARK, when the circumstances make sense of course. Will we be blasting our MarketSquare mailing list (that has thousands of email addresses on it) every day saying ‘Hey, go learn about ARK?’ No, I don’t believe so. But will we send a mass email linking to a great piece of content about the industry that just so happens to feature ARK within it? Sure! Which is what we did when we released MarketSquare’s video The Blockchains of Ready Player One that covers NFTs, gaming, and cool Blockchain projects like Enjin .

ARK also got its own featurette in that video, highlighting its multichain solution to address scalability concerns. Over 10,000 people saw that video, and we even had the chance to work with over two dozen other content creators for sponsored content relating to it during March of this year.

Just as Ray mentioned, with MarketSquare easing the process of working with partners to do cool ARK things, I also experienced the ‘MarketSquare effect’ when collaborating with these content creators. It was easier to get into conversations with them surrounding MarketSquare and our content therein, which in turn resulted in more interest from them about ARK and its goals.

We are still early in the grand plan, but I’m starting to feel the magnetism in the industry already surrounding everything ARK has been up to this year. Development of MarketSquare was brought to completion during Q1, and the launch plan kicked off during Q2. We are currently public, but still on an ‘invite code’ status (which will be lifted when we carry out the main public launch).

The current public version of MarketSquare is somewhat of a Minimum Viable Product, and many powerful features are still in the development plan. Some of those features involve cryptocurrency integration into the platform, including the ARK coin. A few examples include paying for advertising, featured content, or bounties using ARK coins. However, our attention for now is to build out the feature set of MarketSquare such that it becomes the go-to destination for everything Blockchain in the industry. That, coupled with building a large userbase on MarketSquare, is no simple feat. Luckily, the ARK team enjoys tackling these types of challenges head-on.

While it may seem reasonable to wonder how MarketSquare helps ARK, taking a closer look reveals what is really going on. We are dead-set on the unification of the industry (as we always have been), we are increasing our reach and reputation as we build meaningful relationships with other projects and entities, and we are building products that can integrate with the ARK Blockchain and coin.

While it looks like 4D chess sometimes, it boils down to a recipe that is pretty simple: ‘Make friends in the industry, show off their cool stuff, make cool stuff, show everybody our cool stuff.’ I believe in that plan, and as we continue to prepare our releases of more MarketSquare features, Core V3, Explorer, Payvo, Nodem, Deployer, and other ARK goodies, it seems that great things lie in ARK’s future.

Justin is the Senior Brand Manager for ARK.io and holds Bitcoin as well as ARK coins. When not creating awesome videos and content, Justin can often be found in the metaverse or checking out the latest crypto projects.
Tags:
MarketSquare
ARK
Community
Share:
More from MarketSquare
View all