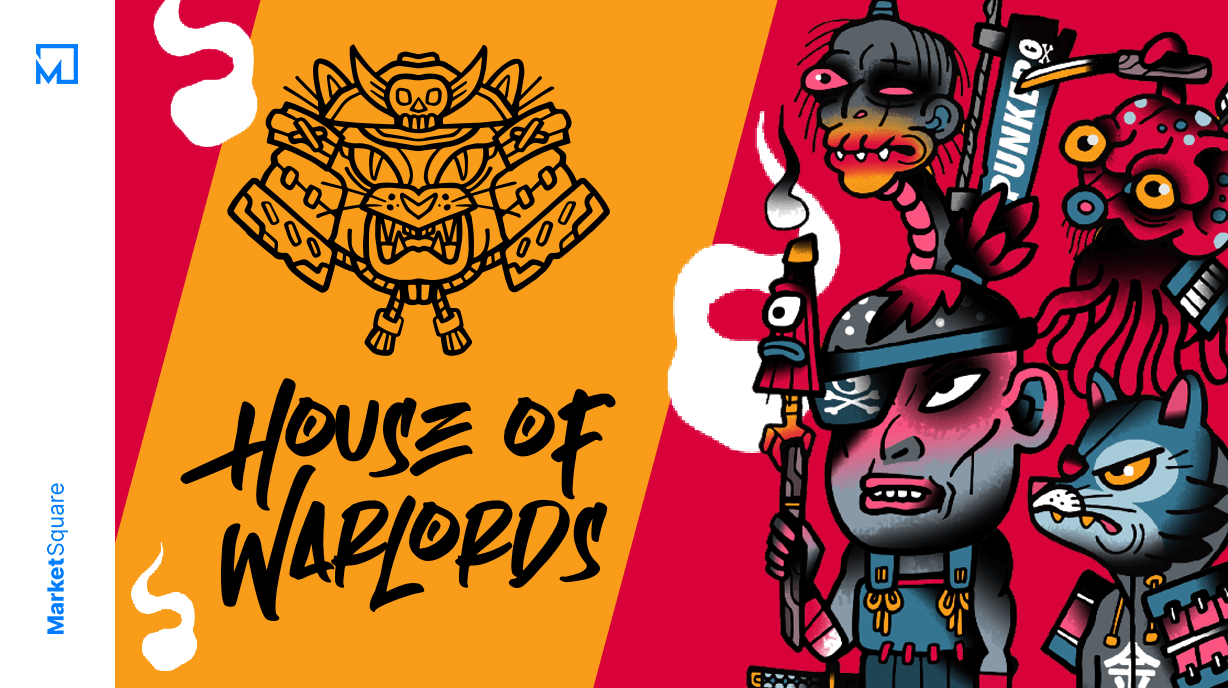 Greetings and welcome to yet another amazing Discovery of the Day! From Monday to Friday we bring you some of our top picks from across the wide world of Blockchain projects: DeFi, NFTs, Blockchain games, Wallets, the Metaverse and more await you right here on MarketSquare, the New Homepage for the Decentralized Web! Today we take a closer look at a project that has Honor and Virtue at its core. It’s House of Warlords!

#Rise of the Samurai

When the Kamakura Shogunate, a hereditary military dictatorship, was established in 1185 AD, all real political power in Japan was placed in the hands of the samurai. Around the same time, Zen Buddhism was introduced by China into Japan. Consequently, many samurai identified strongly with this philosophy as it propagated the idea that finding salvation and inner peace is only possible through thoughtful introspection and meditation.

At the same time, the sword gained great significance in samurai culture. Many held the belief that a man’s honor lay within the craftsmanship and strength of his blade—carefully hammered and sharpened edges, inlays elegantly embedded with fine metals and the creation of intricate sharkskin handgrips became the standard for any serious samurai warrior. 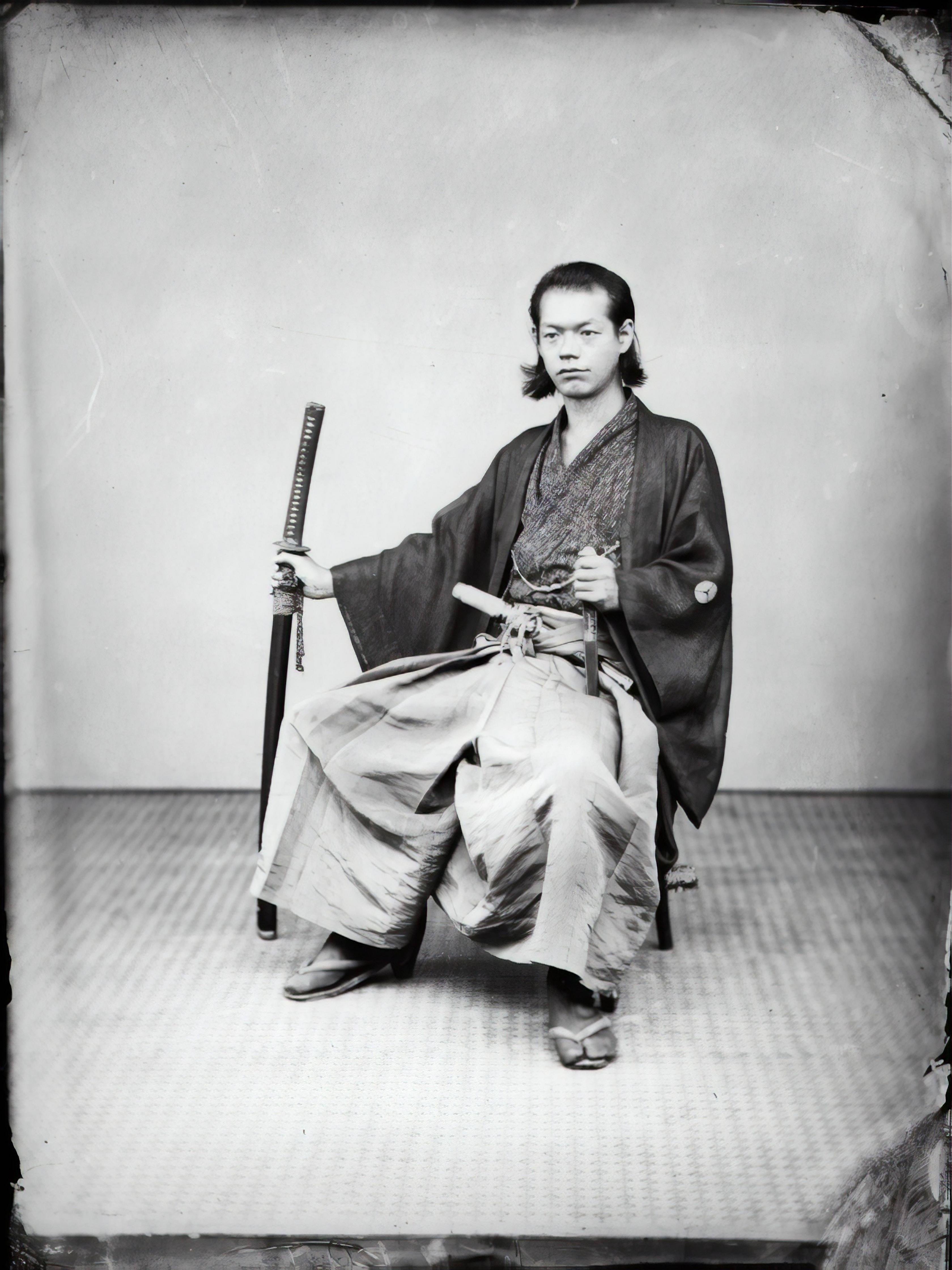 Noble samurai warriors had great respect for their weapons

Despite their decorum and chivalry, it is also true that the samurai were no strangers to war and death. Many of their rituals and practices were suitably gruesome, the most notable of which is almost certainly seppuku , otherwise known as Harakiri. This was a ritual form of suicide by means of disembowelment with one’s own sword.

In certain instances seppuku was performed voluntarily by samurai so that they could die with honor instead of falling into the clutches of their enemies (who would likely torture them to death). It was also used as a form of capital punishment for samurai who had been found guilty of serious transgressions. Finally, samurais performed seppuku because they had brought shame upon themselves and could only restore their honor through this one final act of self-sacrifice…

#The Ballad of the Spleen Flower

When the universe was first conceived, it was no different from a human embryo, possessing all the same parts and organs as an infant. In order to protect these parts, the universe built gigantic fortresses as big as galaxies. However, one part, a tiny, delicate spleen, was left unprotected. Despite its fragility, it could not be contained.

The spleen is a repulsive flower that occupies no definite time or space within existence. If it appears, it is for a mere eight seconds before it vanishes once more. One day, in the jungles of Hokkaido, the spleen appeared, right before a hungry tiger was about to devour a toad. The awful stench reminded the tiger of its favorite kind of catch: the boar. Just before the eight second limit was hit and the spleen disappeared, the tiger managed to bite a small chunk out of it.

This led to a catastrophic event called the Haipa Taimurifuto in which the past fused with the present thanks to the formation of an interdimensional time-rift. It also led to the transfiguration of humans with yokai. Since the spleen flower was damaged, it could no longer regulate the balance between good and evil, and so all hell broke loose…

Soon thereafter, governments and any kind of order collapsed. Two opposing factions rose up out of the ashes and battled against one another in a brutal struggle for supremacy. But all was not well within the factions themselves. Indeed, mistrust, deceit and betrayal were all-too rife, and so ‘Houses’ formed from these two larger factions. Since Haipa Taimurifuto occurred, bloodshed and sacrifice is all the world knows… 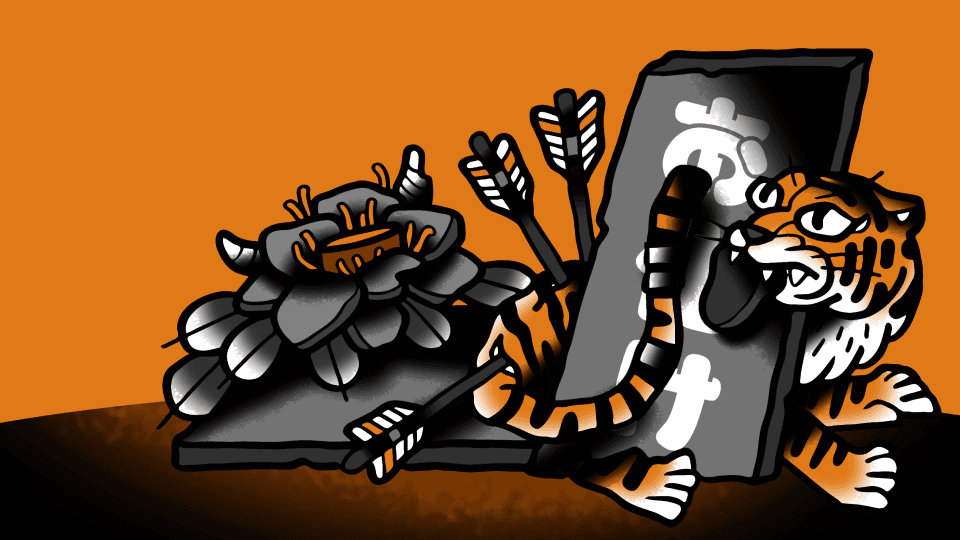 House of Warlords (HOWL) is a next-gen NFT PFP project featuring totally original tattoo-inspired art and some seriously hardcore tech. The collection consists of 8,888 entirely unique programmatically generated NFTs fighting for their honor on the Ethereum Blockchain. Some of its features include:

Sounds pretty exciting, right? That’s because it is. If the Lore wasn’t proof enough, House of Warlords mechanics should serve as evidence of its originality and innovative approach to NFTs. HOWL really pushes the boundaries of innovation not only through its deflationary mechanism, but having on-chain properties which means you actually own the traits of your warlord! Read more about this here and why its important!

And that’s not all! Take a look at the below graphic and you’ll see there’s a whole lot going on in HOWL.

This deflationary event occurs on a monthly basis within the HOWL Ecosystem. By committing Seppuku, one of your Warlords will need to be burned. This will provide you with 1,000 SOUL tokens as well as a 50/50 chance to claim a new NFT as well as the ability to select and transfer traits from one Warlord to another, thus increasing your rarity. Now that really is pretty hardcore!

Oh, if you are lucky enough to be able to claim a new Warlord NFT, you’ll discover these new Warlords are from a brand new House with an even lower supply! To find out more about the Great Seppuku, visit HOWL’s mechanics page. 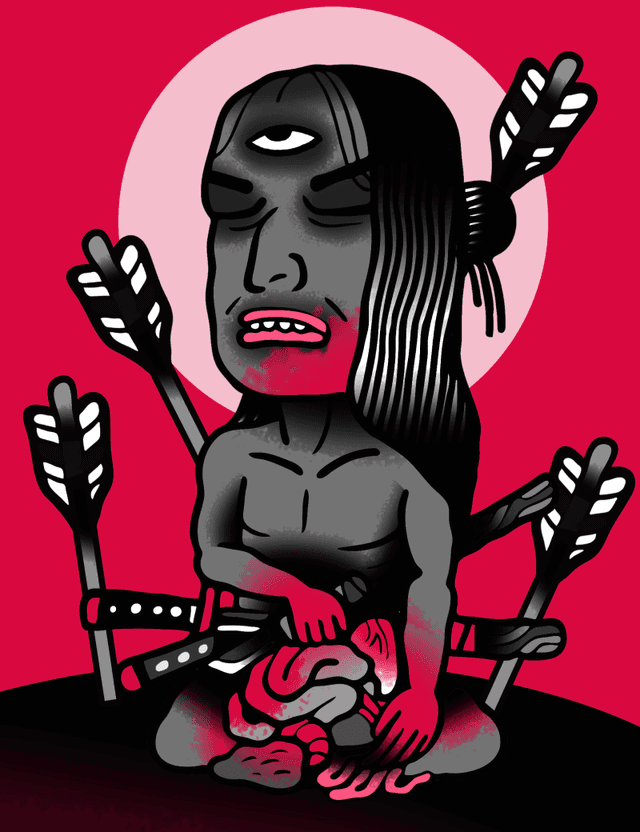 It’s bloody, but it ensures your honor is upheld…

A HOWL holder earns $OUL tokens from the Great Seppuku Event or via Conquests (Staking). These tokens may be used to purchase gears for Warlords as well as 1/1 limited edition artworks, merch or even live experience at the $OUL Collector. Again, to find out more about $OUL tokens, please visit HOWL’s mechanics page. 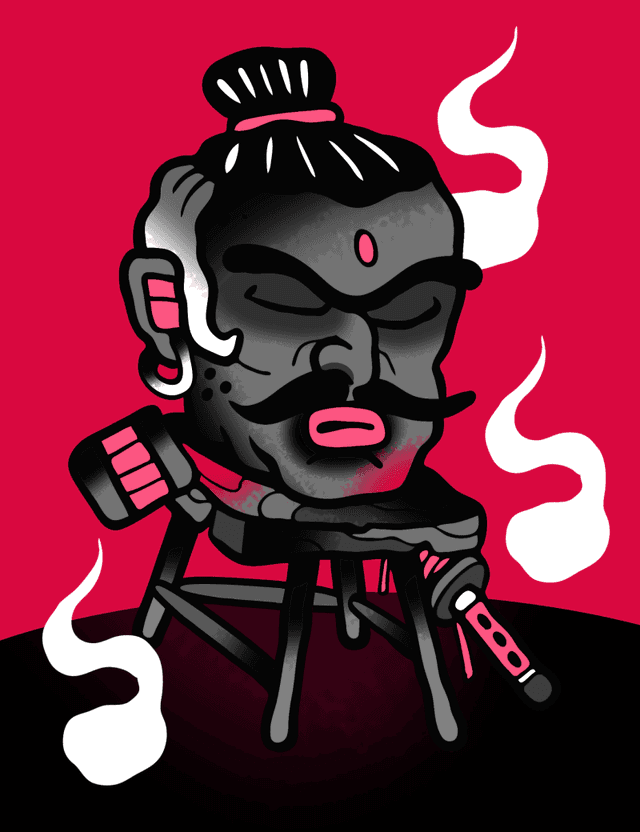 And what do the Warlords themselves actually look like? That’s a great question. Let’s take a look at a few of these amazing NFTs: 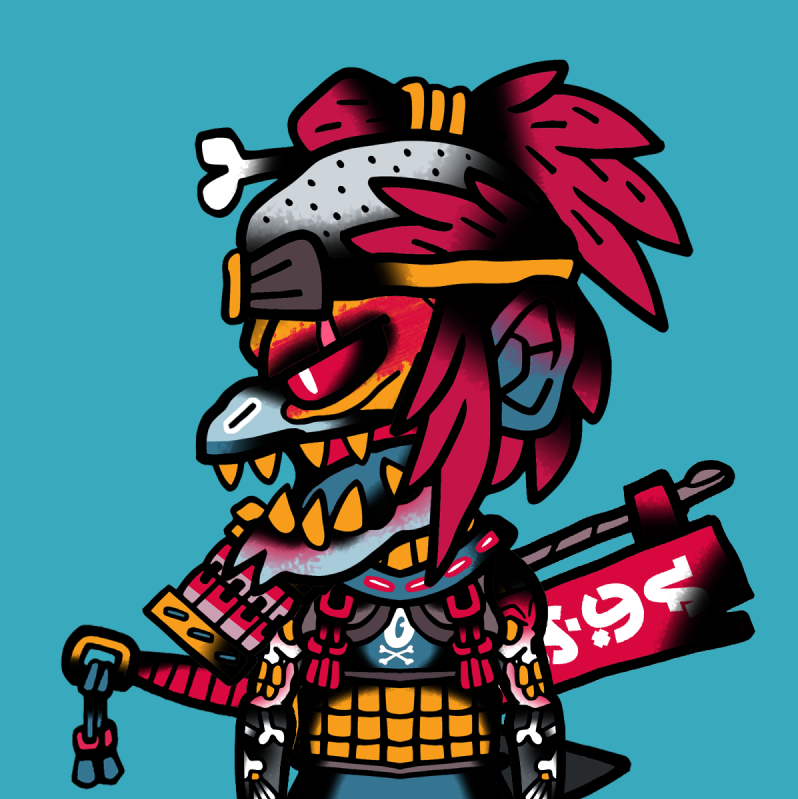 Declan was always averse to smiling for school photos 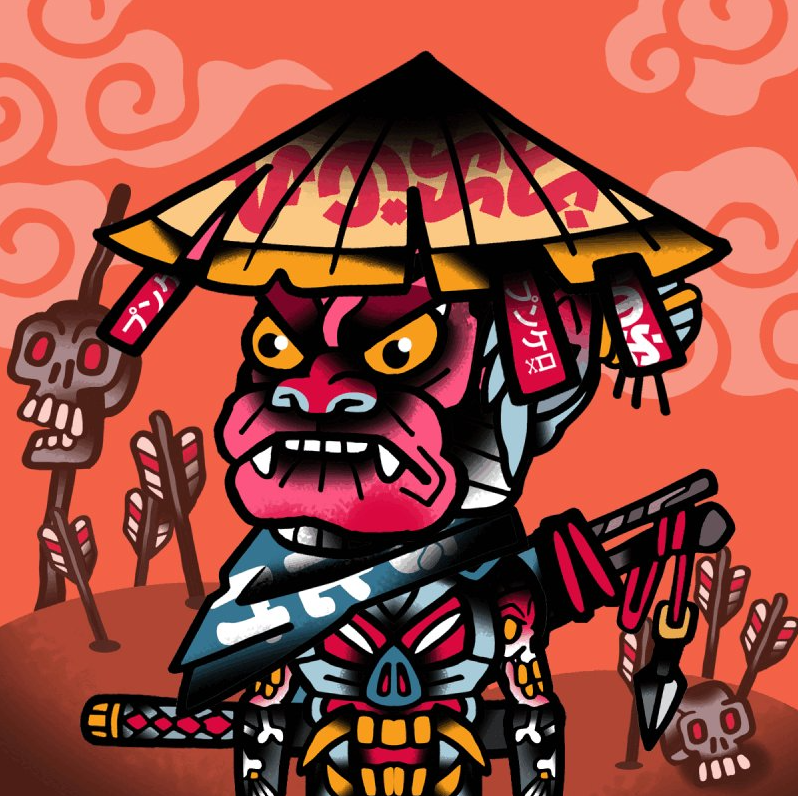 Taking a page out of Vlad the Impaler’s book I see?

#A Map of Sacrifice

A project as complex and original as House of Warlords has a surprisingly straightforward (but no less fantastic) Roadmap. Just check out some of the milestones HOWL has listed below. Alternatively, you can view HOWL’s full Roadmap directly on their official website. 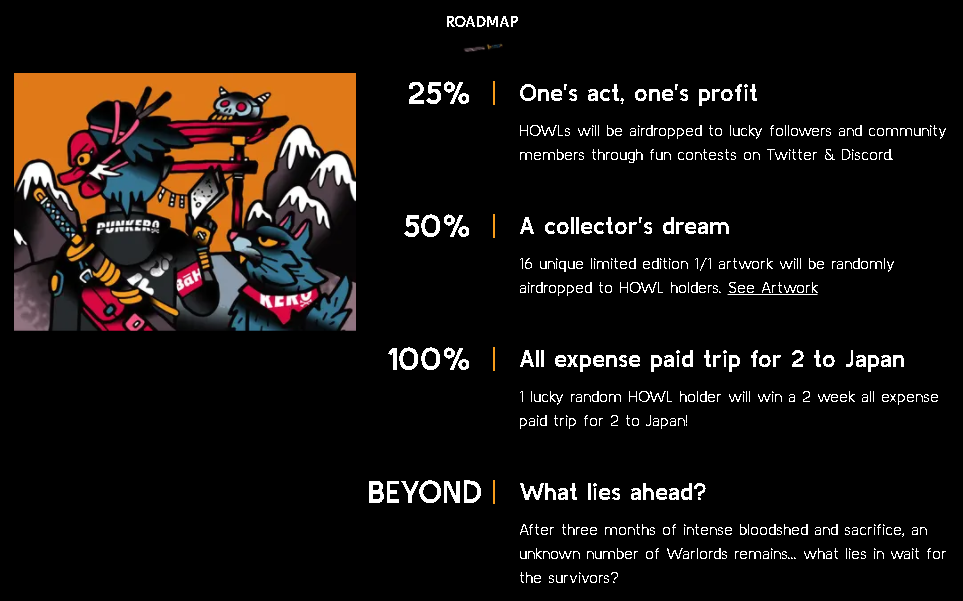 So as I’m writing this, HOWL’s pre-sale is LIVE! If you have been whitelisted, you can mint a Warlord right now by clicking here. (Bear in mind the pre-sale might be over when you read this, so don’t be disappointed if it is!) As for the public sale, this will take place on December 4th 2021 at 8:00 PM EST. HOWL NFTs will be sold at 0.069Ξ each. Check out this graphic for more info:

Again, if you’re reading this and the sale is over, you can just head over to OpenSea and grab yourself a HOWL NFT on the secondary market. And now for some cursory stats…

There’s actually a lot going on with this project that I wasn’t really able to sink my teeth into (like how the team actually spent a bunch of time optimizing the smart contract so you save a LOT on gas), but you can find out more on HOWL’s official website. I also encourage you to follow them on Twitter and join their Discord so that you can receive all the latest news and information about House of Warlords and their endeavors. You do not want to miss this one!

And that’s where this Discovery of the Day ends my friends. If you haven’t yet, be sure to sign up for a MarketSquare profile so you can be part of the New Homepage for the Decentralized Web! I’m not committing Seppuku, but I am out for now. Take care crypto fans! 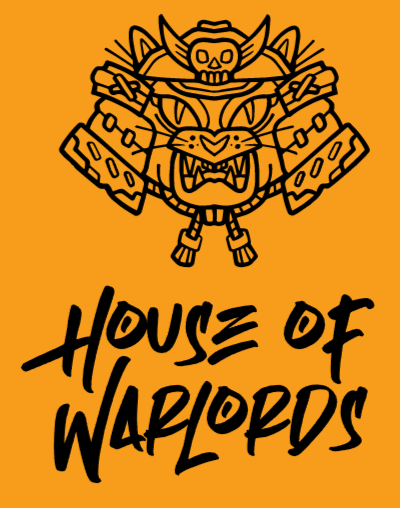