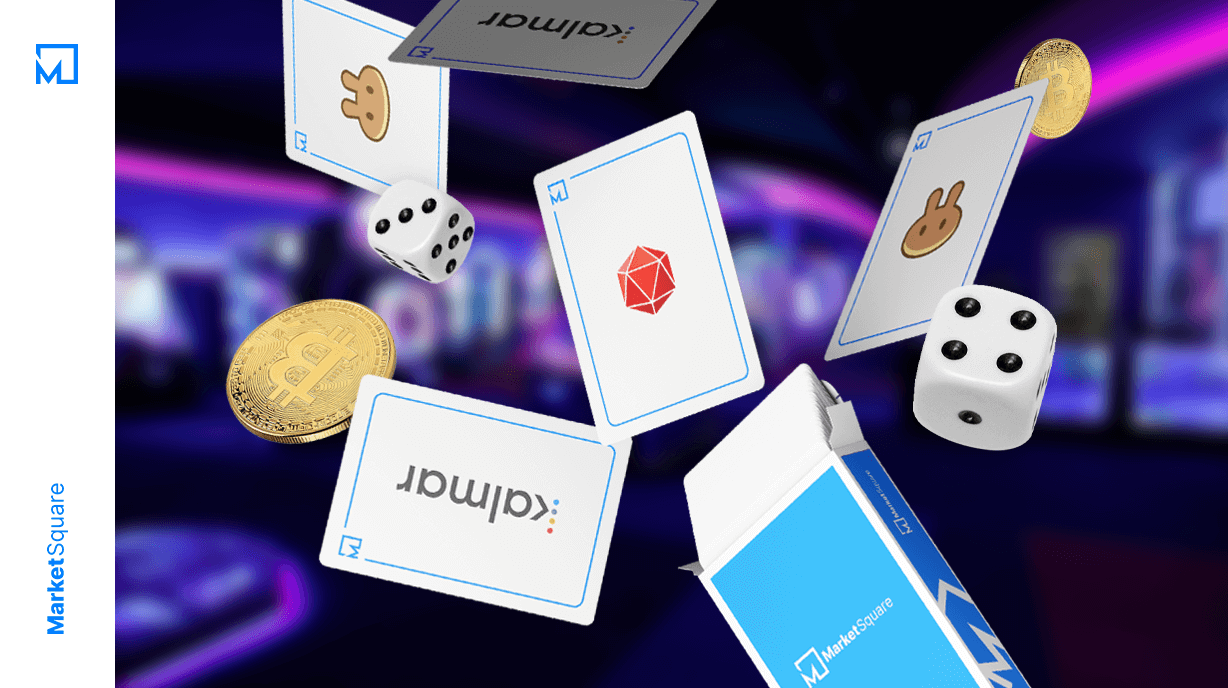 Decentralized Finance (DeFi) is a pretty big deal right now, and new DEXes seem to appear on a daily basis. However, Decentralized Exchanges aren’t exactly super exciting, at least not to regular folks. But several entities have seen the undeniable allure of Non-Fungible Tokens (NFTs) and Blockchain-based gaming and are working to incorporate these winning elements into their own DeFi offerings. Let’s dig in!

#On Your Marks, Get Set: Game!

People learn the most when they have fun, and even as kids, the games we played with our friends (both digitally and in the real-world) helped to shape us as individuals and informed how we see ourselves in relation to others. And in terms of the gaming industry…well, it’s absolutely massive! I always remember being ridiculed for playing games like DOOM, Half-Life and* Warcraft III* as a kid, but now that I’m an adult, pretty much everyone I know is a gamer! My how the tables have turned! 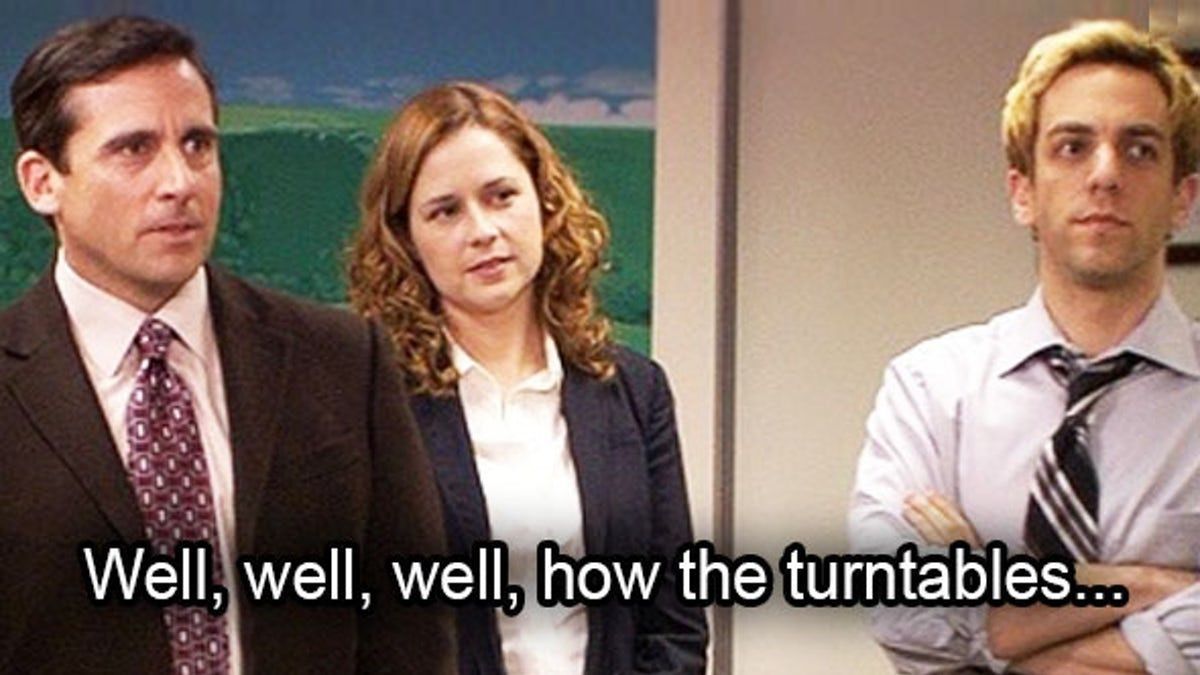 The modern gaming industry is already gigantic and only expanding. Statistics provided by Accenture indicate that, as of May 2021, the total combined value of the gaming industry is over $300 billion. That’s like, more than the value of both the movie and music industries combined! Great Scott!

Much of this has been driven by the ongoing COVID-19 pandemic that has forced many people to find other forms of income and entertainment (most notably through mobile gaming). It’s also because games are fun and engaging with most participants having a hard time peeling themselves away from their devices for even a second (I’m talking about myself, aren’t I?)

And naturally Blockchain-based games are on the rise, especially with the renewed interest in crypto. Some of the more noteworthy games we have here on MarketSquare.io include Blankos Block Party , Star Atlas and Splinterlands to name just a few.

These games differ from their traditional counterparts in that all of the in-game assets exist on a Blockchain and actually belong to the users themselves. In other words, these items are effectively Non-Fungible Tokens (NFTs) that players can use in-game or sell to others on different exchanges around the cryptosphere. It’s a totally new form of ownership that yields real, tangible rewards for participants!

Now for the true Galaxy Brains out there who have witnessed the popularity of DeFi, Blockchain Gaming and NFTs, it’s clear that three ‘heads’ are better than one. No, I’m not talking about some kind of crypto-version of Cerberus (though I’m pretty sure I saw an NFT like that). What I’m saying is, ‘Why have one when you can have them all?’ 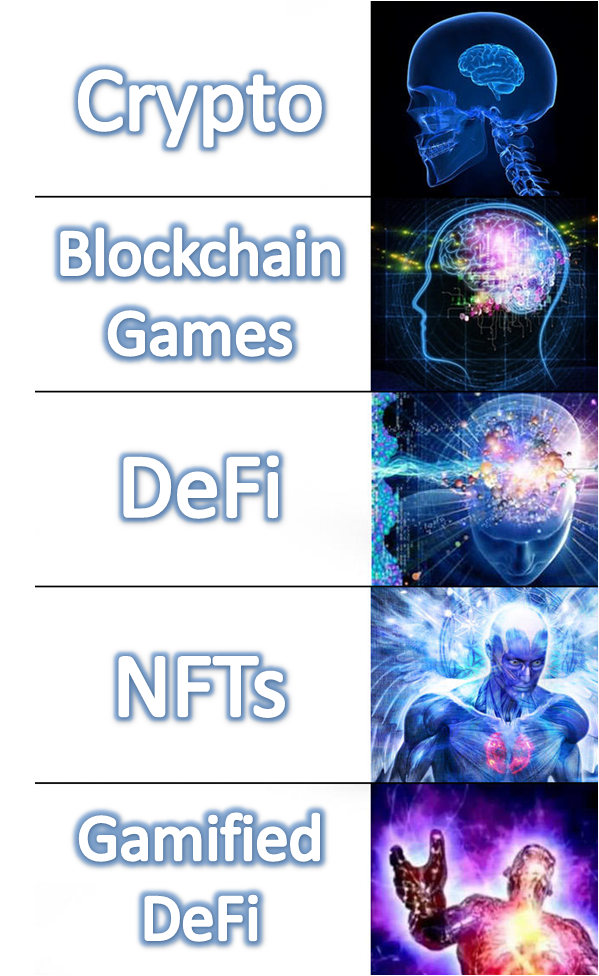 So maybe you don’t agree with my analogy and you’ve realized I put this meme together all willy-nilly, but I think you catch my drift. In order for DeFi to gain popularity and be accepted across the board, platforms will need to appeal to the sensibilities and tastes of the masses. And what better way to accomplish such a Mammoth feat than to take NFTs, Blockchain games and DeFi and mush them all together in one wondrous ball of scintillating awesomeness?

#Keep it Simple, Fun, and Decentralized

How do you eat an elephant? One bite at a time? Well hopefully you don’t eat elephants, but that’s actually the real answer: You don’t. If something seems intimidating or overwhelming, it’s a serious turnoff for most people, so if you know anything about DeFi, it’s uh…not exactly that easy to get into.

For newcomers it’s likely to be anything but simple: DeFi platforms have no intermediaries attached to them or help desk for participants to visit in case something goes wrong. Right now, if you’re into DeFi, the potential for high gains is there, but so too does the possibility of suffering significant losses. That’s why you be extra careful and make sure you do your research beforehand (or at least use a good platform).

A Cointelegraph article published on 27th May 2021 by Connor Sephton discusses Kalmar , ‘The First DeFi Bank’ that hopes to employ a gamified approach to fast-track DeFi adoption.

At present, the platform offers leveraged interest on cryptoassets and an NFT fundraiser that allows capital accrued from NFTs to be exchanged for real rewards. Here users receive NFTs at random, and later on, these items can be sold on NFT markets or exchanged for different rewards. Check out some of these Kalmy NFTS available through Kalmar. Pretty cute, right?

The actual gaming platform is allegedly still in the works but will allow users to earn rewards in different skill-based games and by competing in tournaments. The great thing about gamification in something like DeFi is that it acts as an excellent teaching tool and gives users the opportunity to improve their skills and understanding of DeFi as well as other crypto-related products and services. Users who want to learn more and increase their yields can use gamified platforms to grow their confidence and abilities before moving on to more technical (and potentially more profitable) activities.

#So Which Platforms Use Gamification?

One of the best examples of gamification in crypto can be found in popular DeFi platform PancakeSwap . One part of the platform that seems to be gaining a lot of traction is their weekly Community Farm Auctions . So how does this work?

According to PancakeSwap itself , the first community auction recently ended with 20 projects bidding CAKE, and as a result, a total of 57,380 CAKE is due to be burned! Five projects emerged victorious, namely Babycake, Binamon, Metahero, Wall Street Games and MacaronSwap. The burning of CAKE will effectively reduce the overall available supply and should increase the price of each individual CAKE token. It appears that PancakeSwap’s first Community Farm Auction was a big success, and on this basis, I’m sure it’ll only continue to grow in popularity.

There are more gamified features on PancakeSwap over and above its Community Farm Auctions. Users can also participate in lotteries by buying tickets with CAKE. One lucky winner will receive the full pot that usually consists of thousands of CAKE tokens (or tens of thousands of Dollars). There’s also the opportunity to take part in Prediction Markets in order to earn CAKE, but this part of the platform is still in its Beta phase and has not been officially implemented as-yet.

PancakeSwap boasts collectible NFTs on its platform as well that serve as profile pictures for participants. Once an NFT has been purchased and a profile pic set, users can choose from one of three teams (Syrup Storm, Fearsome Flippers or Chaotic Cakers) in order to earn prizes. The better a user’s team performs in battles, the bigger the prizes they earn. Big winners get big winnings!

I’m still waiting for a Warhammer 40K themed DeFi platform, but until then, great platforms like DungeonSwap will more than do the trick. Maybe ye fancy yerself a great knight? Or perhaps ye believe yerself ta be a moighty wizard? Well fear not my fantasy-loving friend, DungeonSwap is just the answer to all your Medieval and Decentralized Finance needs! 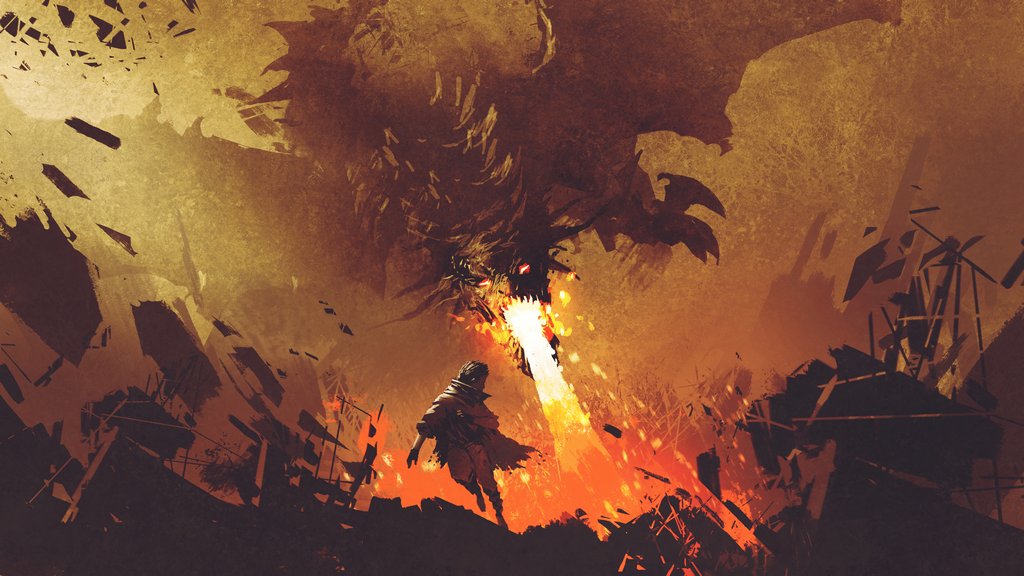 Yes indeed sword-wielders and dragon-slayers, think of DungeonSwap as the Dark Souls of DeFi (I’m sorry, I had to, OK?) or PancakeSwap, but instead of bunnies, it’s Dungeons & Dragons. DungeonSwap hosts all the features one would expect in a DeFi platform including an Exchange (Trading Market), Liquidity Pool (Liquidity Fountain), Yield Farming (Fantasy Farm) and Staking Pool (Alchemist’s Pool). However, where it differs from other platforms is in its RPG feature known as The Dungeon.

At present, players may choose from a Tutorial called ‘The Training Field’ and two other campaigns. At time of writing, players will pay 0.7 DND (the native token of DungeonSwap) in order to undergo training. Upon successfully completing the tutorial, would-be adventurers will earn some basic equipment to help them with the challenges laid out before them.

The first of the two campaigns is called ‘The Mad Wizard’s Underground Lair.’ This is recommended for adventurers with equipment that has at least a two-star rating. Players will pay 1 DND entry fee and stand the chance of receiving jackpot winnings of up to 11,472.28 DND. Naturally this all depends on whether adventurers actually survive the Mad Wizard’s wrath and find his vast vault of treasure!

The second campaign known as ‘The Grand Colosseum’ sees players facing up against a swathe of hideous creatures bred by the mysterious Mages’ Cabal. This more advanced campaign will cost adventurers 10 DND to enter with the jackpot prize totaling 14,860.88 DND should they succeed in their quest. This particular scenario is recommended only to those players who possess three-star rated equipment or better. There is a third campaign called ‘The Immortal Lich’s Forbidding Castle,’ but it is not available to the public at time of writing.

DungeonSwap plans to add further features to their platform in the near future including an NFT Market and ‘Smithy’ for upgrading equipment. With its RPG sensibilities and Medieval theme, DungeonSwap certainly sets itself apart from other DeFi platforms and appeals to a generation of users who grew up on tabletop games, fantasy novels and RPGs on Desktop and Console.

#Are You Not Entertained?

Maybe gamification and NFTs aren’t for everyone…they probably aren’t. But just because gamified platforms exist doesn’t mean that more traditional DeFi platforms are simply going to disappear. Quite the opposite I think. DeFi is still very much in its infancy, and the way the industry will look and work within the next few years will probably be significantly different from how it is now. It’s hard to say, but if nothing else, we should see new features and greater innovation coming through in waves in the world of DeFi as time progresses.

I’m a big believer in the concept of ‘novelty’ when it comes to hooking people in and keeping them entertained. Gamified platforms certainly have a lot going for them and have the potential to reach a much wider market more rapidly than those platforms that are more technical and niche in nature. Your tech can be great and your team super professional, but if you don’t cater to your target markets’ tastes, don’t expect them to take notice, let alone stick around.

I think we’ll see a lot more crossover between DeFi, NFTs and Blockchain-based games in the future. This is how innovation happens really, and those platforms that manage to capture and present all those different elements within the cryptosphere stand to benefit the most in the long-run.

Brynn is the Content Manager at ARK.io, lead DeFi writer for MarketSquare and die-hard metalhead. When not researching yield farming, he spends his time crushing demons in DOOM or shredding his favorite axe.
Tags:
NFTs
DeFi
Gaming
Share:
More from MarketSquare
View all