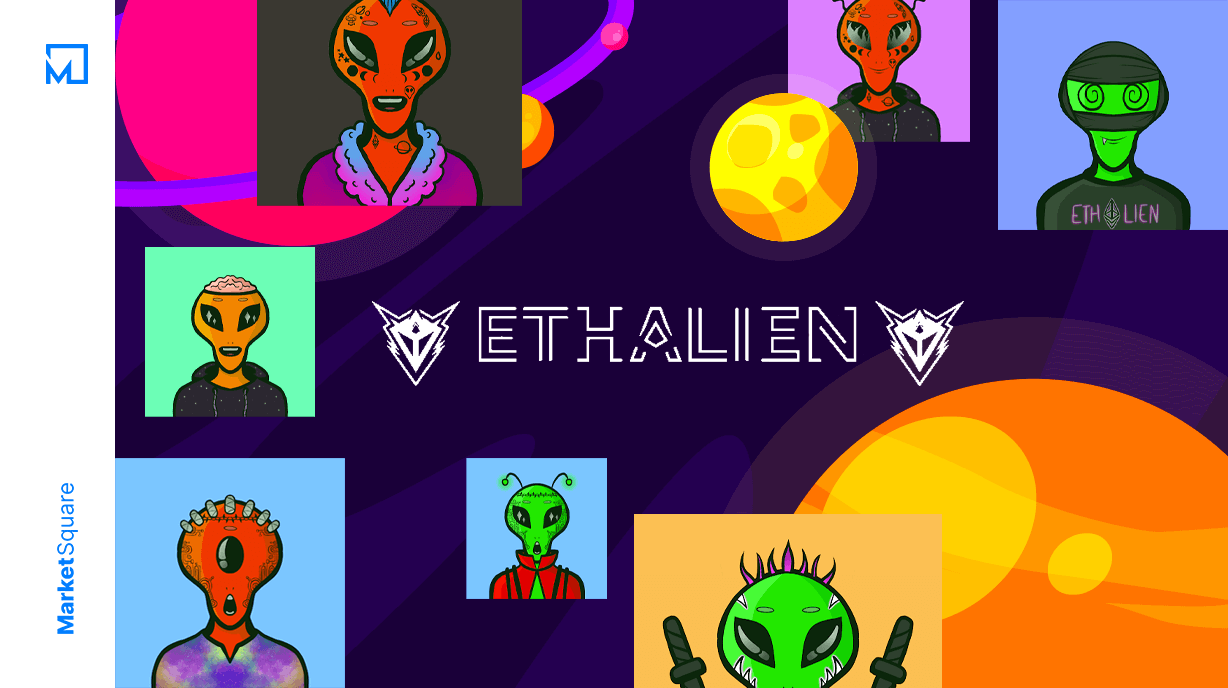 Hey everyone and welcome to another killer Discovery of the Day! MarketSquare recently moved into its Open Beta, meaning you can now sign up for a profile and explore all the site has to offer. From Monday to Friday we bring you some of the best projects from across the cryptosphere. Whether it’s NFTs, the metaverse or Blockchain games, you’ll find it all right here on MarketSquare! Today we take a closer look at some interstellar travelers who have found a new home on Earth…This is Ethalien!

In the last few decades there have been numerous discoveries that suggest life exists beyond the familiar atmosphere of our beloved planet Earth. There have been several ‘sightings’ where UFOs have been spotted hovering or careening across our skies, and who can forget all the controversy surrounding the Roswell Incident of 1947? Regardless of your thoughts and theories on these strange occurrences, there are other, shall we say, more ‘scientific’ pieces of evidence that would incontrovertibly prove the existence of extraterrestrial life in some form or another:

Although these are all very intriguing, we have yet to see indisputable proof that aliens actually exist. Time and time again, conspiracy theories, UFO sightings and alleged scientific research have been debunked. Despite this, maybe, just maybe, 2022 will be the year aliens finally make contact… 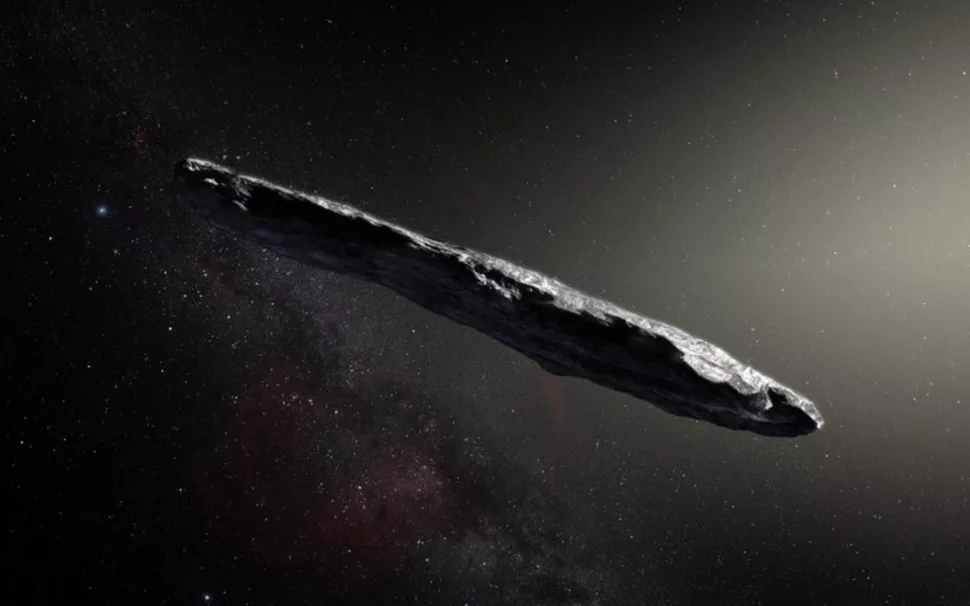 Oumuamua, a mysterious, interstellar object that drifted into our solar system about two years ago

However, we have seen proof of aliens living in the metaverse—The Alien Boys, Lonely Alien Space Club, and Alien Frens are just a handful of the otherworldly visitors currently dwelling within our solar system. These aren’t the only extraterrestrials around though—as it turns out, there’s a new species in town, and they’re infiltrating and living on our very own blue orb, Earth! Today, we bring you Ethalien! 👽

Ethalien is a collection of 7,500 NFTs that fled their home planet, Zerkton, and now inhabit Earth. The focus of the project is to facilitate a strong community and become a major player within the realms of Play-to-Earn (P2E) gaming. However, these funky Ethaliens are just the tip of the iceberg in the wider Ethalien Metaverse.

Throughout December and January, if you held two Ethaliens and 300 $STAR, you were eligible to breed them in order to create a Baby Ethalien! These cute little guys come with plenty of utility and give you access to exciting features such as:

Wow! Now that really is a ton of utility! Now let’s take a look at some of these sweet Baby Ethaliens 👀

$STAR is an ERC-20 utility token that fuels the Ethalien Ecosystem. It’s capped at a total of 69,420,000 (ba dum tss!) Each Ethalien generates 5 $STAR per day for a total of 5 years. That’s what I call long-term utility! The token can be used throughout every collection (Ethalien, Baby Ethalien & Ethalien VOX) as well as the STAR Shop, STAR Auction and Starcade.

Last but not least, let’s talk about the latest addition to the Ethalien Metaverse…Ethalien VOX! These Ethaliens can be used in any metaverse that supports .vox files (we’re talking The Sandbox , Cryptovoxels , and so on). In addition, mystery asset boxes will be available with the $STAR token in the STAR shop for your Ethalien VOX. Now let’s take a gander at these lil guys!

The Ethalien VOX whitelist presale will take place on January 28th with the public sale following one day thereafter—the reveal will take place upon sell out, so get your wallets ready people!

Ethaliens have a nifty Roadmap with exciting features such as the Ethalien Vox Collection (as I mentioned above), the $STARcade and the mysterious ‘Project Empyrean.’ Check out our version of their Roadmap below! 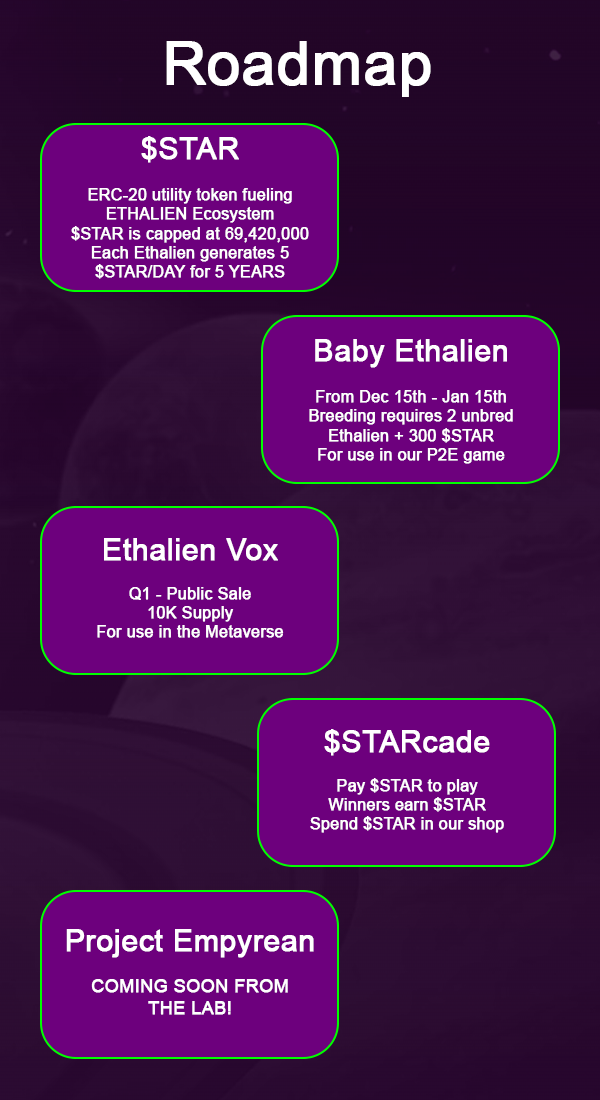 Ethaliens and Baby Ethaliens can be purchased via the secondary market on OpenSea. Let’s take a look at some stats, shall we?

The team behind Ethalien is currently getting ready for the upcoming Vox collection mint in a few days. With its colorful and sleek art style and growing community of supporters, Ethalien is definitely a project to keep a close eye on. Make sure you follow them on Twitter and join their Discord so that you can secure a place on their whitelist and be ready to mint one of these sweet aliens!

And here ends this journey everyone. What do you think of Ethalien? Let us know via any of our social media pages. If you don’t have a MarketSquare profile yet, make sure you sign up for one so that you can receive all the latest news and check out everything the site has to offer. Oh, and get your friends and family to sign up too…after all, MarketSquare is for everyone, and that’s how we’d like to keep it! Thanks for your time, it is always greatly appreciated! Take care of yourselves and see you around!

Reece is a video editor and Blockchain Games researcher at MarketSquare.io. He moonlights as a twitch streamer and can often be found slaying wither skeletons in Minecraft when not hunting for the latest NFTs.
Tags:
NFTs
PFP
Discovery of the Day
Share:
More from MarketSquare
View all