Ember Sword is our Game of the Month! September 2021 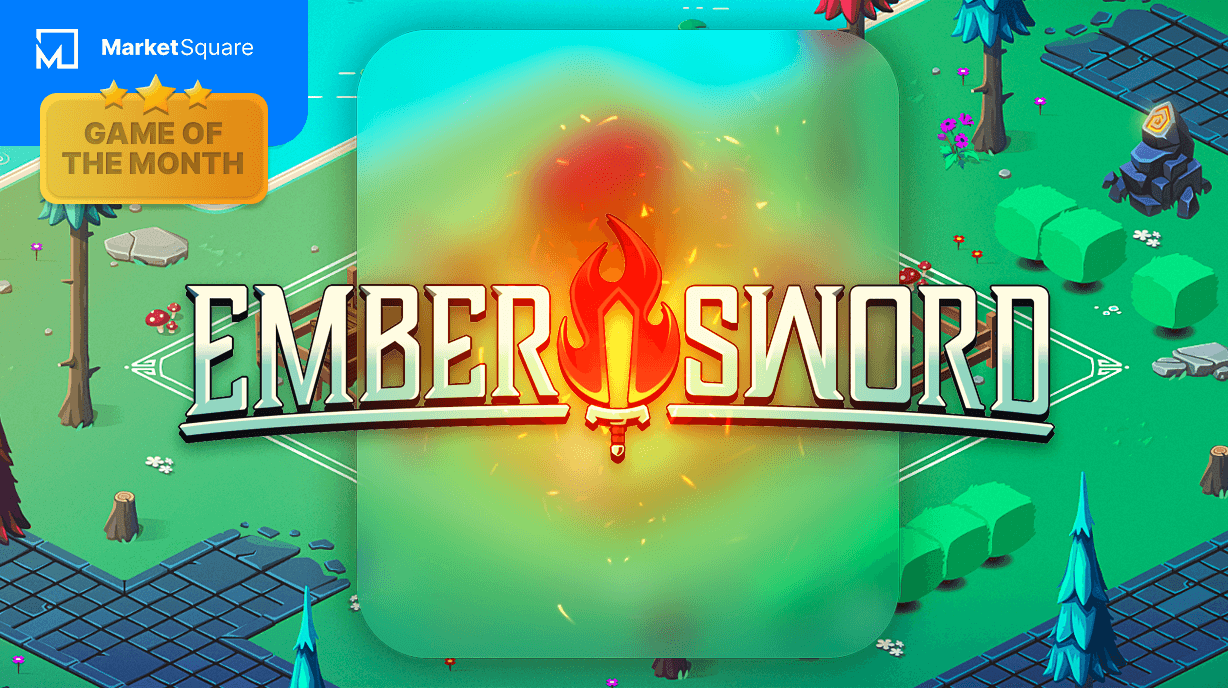 Here at MarketSquare, we are always looking to expand our Blockchain-based community and augment its ever-evolving diversity. We currently have a host of dApps, projects and services on our platform, but today we shine the spotlight on a Massive-Multiplayer Online (MMO) game that combines the fun of Role-Playing Games (RPGs) with the digital ownership aspects of Blockchain and NFT-based technology. Modeled without Pay-to-Win mechanics and completely Free-to-Play, we present Ember Sword, a Shining example of how to incorporate Non-Fungible Tokens (NFTs) into a game. Let’s take a closer look at our September 2021 Game of the Month!

#An MMO Powered by Blockchain

Ember Sword is a Blockchain MMO created by Bright Star Studios . Founded in 2018 by M. Laursen, J. Huijberts, S. Durain, and S. Thorsen, Bright Star set out to make a game that put its users first, by giving them the opportunity to own their in-game assets. This represents a fundamental paradigm shift away from traditional gaming business models that put the game’s developers first. The added bonus here is that, unlike some Blockchain games that can be cumbersome or confusing to install and play, Ember Sword was created with instant playability in mind. The end result is a Blockchain gaming experience that is fluid, intuitive and highly entertaining.

Ember Sword is built on the Polygon Network , a Layer-2 solution that links multiple Blockchains together, effectively driving the mass adoption of Ethereum. Polygon specializes in creating scalable dApps that focus on performance and user experience, something Bright Star Studios took note of. Out of this realization, Ember Sword was born. The game also features PIXEL, its native token that serves as the primary unit of exchange within the game’s ecosystem. 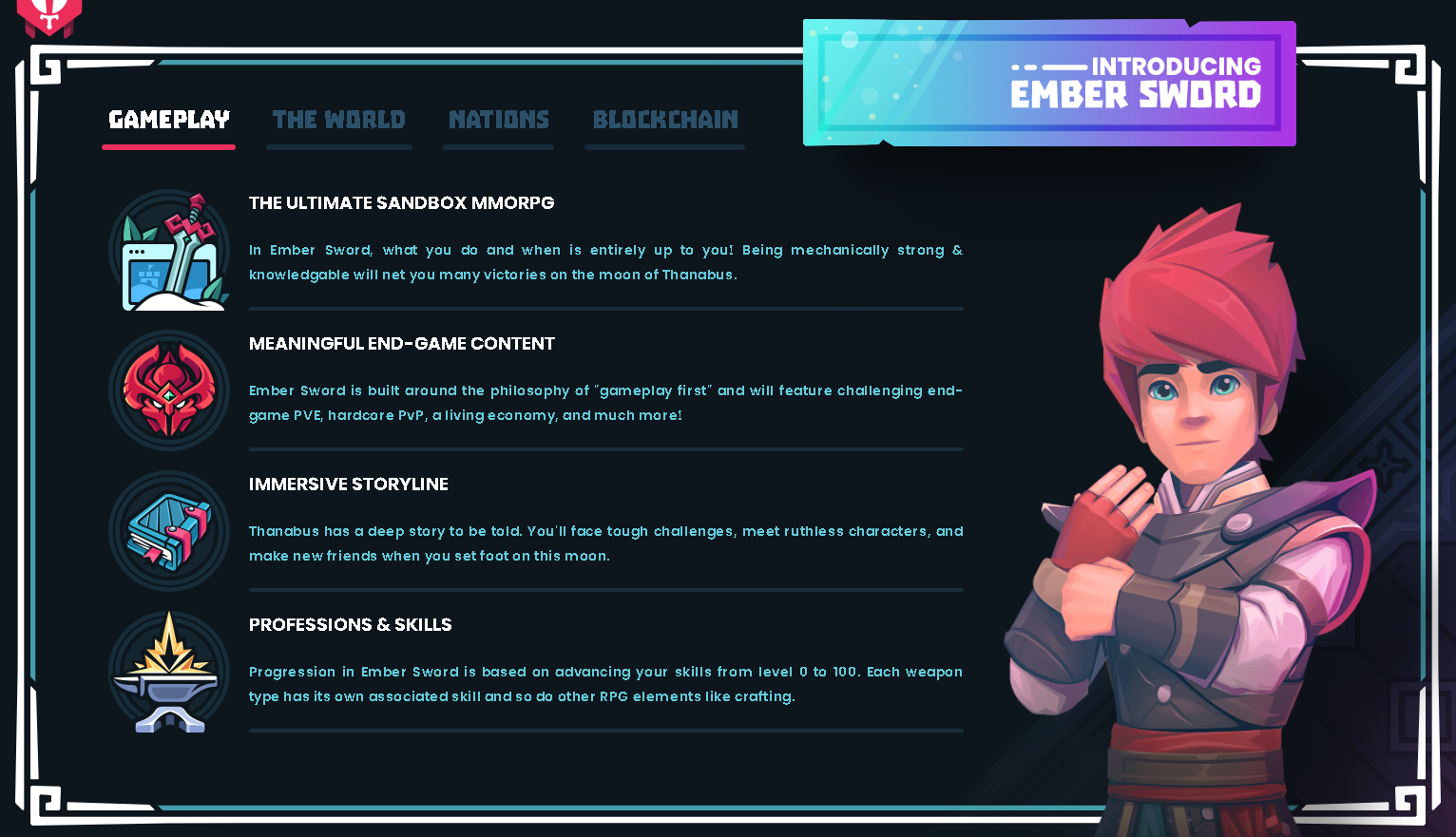 So, you might be asking yourself, ‘Is this really Free-to-Play? Can I really earn items with real world value? What’s the catch?’ Simply put, there isn’t one thanks to the way Ember Sword is structured. While the company is centralized for profit, they have chosen to give a lot of value back to their users, and it’s this ingenious attitude that has created an entirely sustainable and authentic ‘we live and die together’ system.

Ember Sword derives its profits from transaction fees: every time a player trades, sells or buys items from other players, the fees they incur go towards sustaining the platform. In short, the game receives funding based on the size of the active player population and community. If NFTs have taught us anything in recent months, it’s that the more people within an NFT community, the more valuable those NFTs become. With this in mind, it’s easy to understand how this is a win-win for both players and the developers behind Ember Sword.

#Life on the Moon of Thanabus

Let’s get into the game itself: Ember Sword is a fantasy-based MMO that features a top-down view not unalike traditional dungeon crawler games. It takes place on the Moon of Thanabus where colors are vivid and pronounced, which is a refreshing shift when compared with the typical dark and dreary aesthetic employed by the majority of RPG games that use a similar top-down format.

A wonderfully unique art concept brings this fantastic world to life which has an oddly appealing simplicity in its visual design. Thanabus is divided up into 4 different nations (Solarwood, Duskeron, Edisau and Sevrend), each consisting of three ‘Territories,’ namely Kingship, Wilderness, and Outlaw. Each provides its own unique challenges and acts as a sort of leveling guide for players.

Kingship is the easiest territory where there is no Player Versus Player (PVP) and significantly weaker mobs to contend with. Wilderness features more challenging mobs and allows PVP, upping the stakes for players who want to test their mettle before moving up. Finally, Outlaw offers a more brutal version of the previous Territories. Stricter punishments are dished out for making fatal mistakes, but naturally, the potential rewards are substantially higher.

Players who decide to take up the call and join, choose between three different classes: Melee, Ranged, and Energy. Each class is able to use certain weapon types like Swords, Great Swords, Staffs and Bows. Armor types range from Cloth to Mail, and your class can wear multiple armor types at the same time (that is, if your class is actually able to wear different types of armor). Don’t expect full Plate Mail for an Energy-Class Hero.

Check out this early pre-Alpha gameplay footage of Ember Sword

Players can choose to experience the game in a number of different ways. Are you more focused on completing quests, harvesting materials and just fighting monsters? Or do you want to be the most feared player on Thanabus by slaughtering others in Player-vs-Player active Territories? Or maybe you want to group up and play with your friends or even make some new ones? You will be able to do all this and more in the endlessly entertaining world of Ember Sword.

#An Even Playing Field

One of the things that really sets Ember Sword apart is how its developers have integrated traditional time-locked events but chosen to empower its users and NFT community instead of themselves. Time-locked quests and tasks provide special skins or outfits as rewards, and when these events occur, these items may never appear again. We have seen this feature for many years in mainstream gaming as players flock to these time-locked events in their droves. However, in the case of Ember Sword, players actually own them. Whenever a player receives an item, it’s entirely theirs and theirs alone.

There is also another aspect to these events: instead of completing tasks to acquire a unique skin, players can choose to search out or even accidentally stumble across a giant monster or creature that has an item only available at that time (or possibly even for that specific encounter). However, from what we’ve read, you’d better bring some friends along, or you might find yourself eaten in no time.

We have started to see more Blockchain games incorporating Pay-to-Win elements with NFT or in-game item values restricting new players from joining. This is why it’s refreshing to find a game that focuses on an even playing field while promoting Blockchain and NFT-based communities.

MarketSquare is proud to have Ember Sword as part of our growing community. We wish them luck and great success in their mission to create an honest system that seamlessly blends the love of gaming with digital ownership through the use of Blockchain technology. A well-deserved and hearty congratulations to Ember Sword for being our September 2021 Game of the Month!

For more information, head over to the Ember Sword Profile on MarketSquare

YouTube
Spizzo is a videographer, writer and gamer. He spends his nights dominating tug of war with his dogs, popping domes in games, and preaching the good word of his favorite altcoin.
Tags:
Game of the Month
Gaming
Ember Sword
Share:
More from MarketSquare
View all