Defending the Future of Crypto 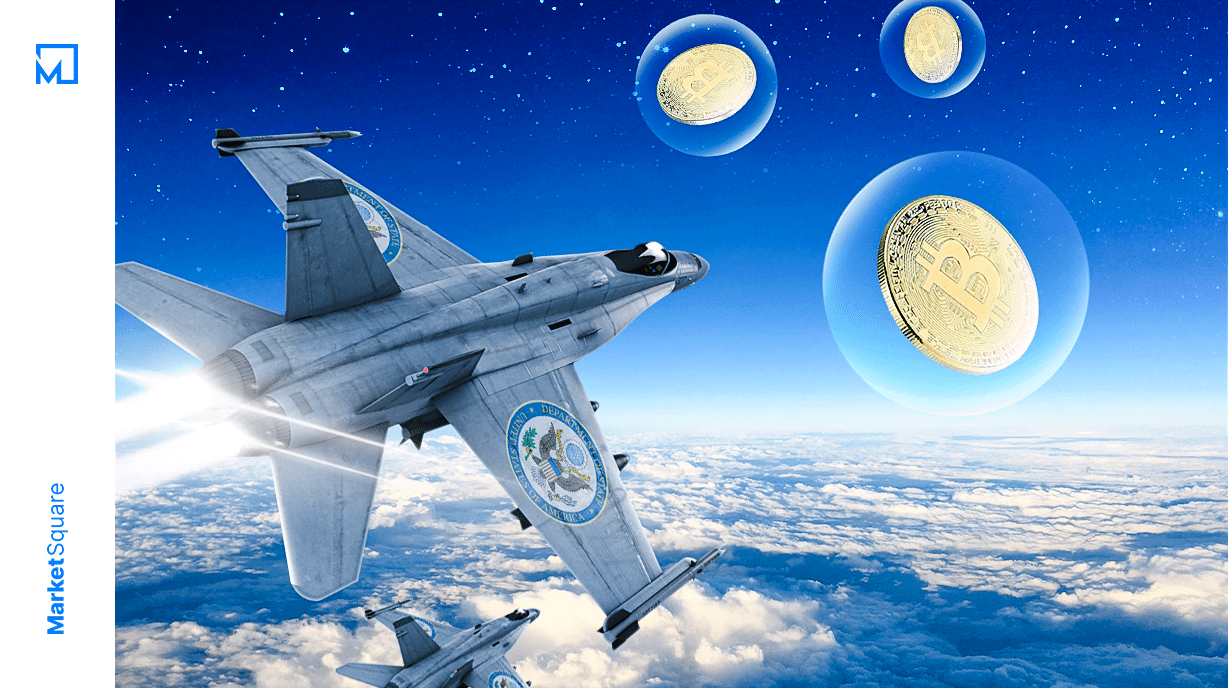 Regulation, regulation, regulation. Hardly a day goes by in the cryptosphere without hearing the word. The US Senate just passed a $1.2 trillion Infrastructure Bill to refurbish much of the nation’s roadways, ports and bridges, as well as make provisions for and circumvent many of the negative effects of climate change. So how does crypto enter into this? Well, the funds for infrastructure need to come from somewhere, and it seems that tighter regulation of crypto is part of the equation…

#The Cost of Living

In recent years, humanity has prospered as a result of technological innovation and the streamlining of processes that make life more convenient, safe and comfortable. We’ve managed to spread across the length and breadth of the planet in a matter of decades, conquered innumerable diseases and created an intricate and ever-evolving network of information, businesses and services. As a species, we really are at the top of our game: apex predators with no other species to rival us.

Progress comes at a cost though, and with the way we’ve built our societies and our economy, the price has been tremendous. In a Bloomberg article by Sydney Maki, as of February 2021, total world debt stands at about $281 trillion, and you can be sure this figure has risen since then. Imagine you had 281 million briefcases, each containing $1 million. That’s what $281 trillion looks like. You could also think of it as every single person living in the US receiving about $930,000 each. Yikes!

Modern economics is something of an absurdity: rampant debt, money printing, skyrocketing consumer prices, ballooning inflation, the destruction of livelihoods…need I go on? Oh yeah, Coronavirus hasn’t made things easier either, but that’s hardly news now, is it? The cost of living has risen considerably over time, and the main driver behind this is inflation. In a 2016 Economicshelp.org article by Tejvan Pettinger, most Central Banks believe that a moderate inflation rate is conducive to healthy economic growth. This also depends on the growth of incomes outpacing inflation as well as several other factors.

The 2019 Financial Disruptions Survey conducted by TD Ameritrade indicates that Millennials in the US believe the increased cost of living is the biggest threat to their financial wellbeing. Meanwhile, Boomers and Generation X are becoming increasingly concerned about the cost of healthcare (which is already alarmingly high in the US). Keep in mind that all of this occurred a little while before the Coronavirus pandemic, so in all likelihood, the concerns of adults in the US (and across the world) have only multiplied.

Given how things have been going over the past couple of decades, it should come as no surprize that US Goverment spending has risen over time. In fact, expenditure hit an all-time high in the first Quarter of 2021. Take a look at this chart courtesy of Trading Economics : 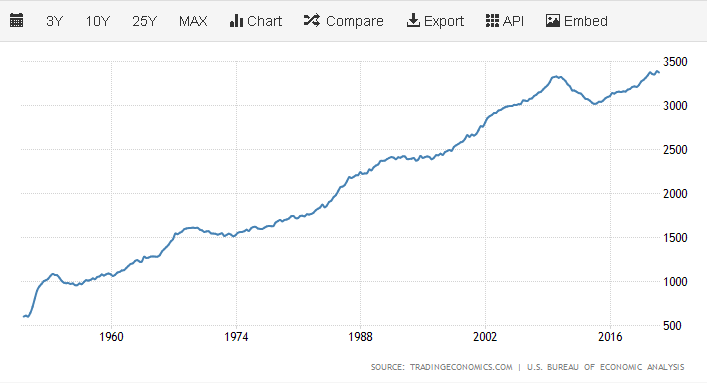 It would seem that the Government’s appetite for spending has only increased over the years, and if the $1.2 trillion cost of the Infrastructure Bill is anything to go by, it’s clear that the trend is far from dead. As I mentioned earlier, this money isn’t just going to come out of nowhere, so the Bill contains several provisions and proposals on how to go about acquiring these funds. If a report by Emily Cochrane of The New York Times is right, this means reallocating unspent pandemic funds, delaying Trump-era policies regarding drug companies and Medicare patients, and regulating cryptocurrency more stringently.

The buck doesn’t stop with the Infrastructure Bill though: a further $3.5 trillion will be required in order to finance the Senate’s social policy budget (the Reconciliation Bill), which will necessitate a tax increase. However, these taxes will allegedly target big corporations, large inheritances and the wealthy. Regardless of where the money actually comes from, Government spending isn’t going to decrease anytime soon and will require significant backing. Shortfalls are also expected to add billions of Dollars to the deficit, which apparently isn’t really that big of a deal to the majority of senators.

#So How Does This Affect Crypto?

Right, so the real question here is how the Infrastructure Bill will impact the Blockchain Industry. Simply put, all crypto ‘brokers’ will be required to carry out Know Your Customer (KYC) procedures on their users. The big problem here is that the Infrastructure Bill’s language, especially regarding crypto, is pretty damn awful. This is because the definition of a ‘broker’ is ill-defined at best, meaning that miners, validators and even protocol developers could be considered ‘brokers.’ I’m sure you can see the problem here. Judging by reactions on Twitter…well, see for yourself:

There’s no doubt that Ebeling is right about the fact that most people responsible for this legislation categorically do not understand the mechanics or functions of digital assets. Hastily passing legislation on crypto is simply not a good idea since it affects many members of the middle class, stifles innovation and pushes development overseas towards more favorable environments. To call Senate’s passing of the Infrastructure Bill with the current language on crypto ham-fisted would be generous. Crypto is an emerging sector and is extremely nuanced, so making sweeping generalizations and failing to protect important parts of its own infrastructure is irresponsible, reckless and, ultimately, counterintuitive.

Now before you totally lose heart, there was some pushback on the Bill, and quite a lot for that matter. According to an article by Nathan van der Heyden of Crypto Briefing , two amendments were put forward after the crypto community came together to take a stand and defend against the provisions of the Bill. The first amendment put forward by Senators Warner, Sinema and Portman attempted to exclude Proof-of-Work (PoW) miners, hardware manufacturers and service providers from being labeled as ‘Brokers.’ The crypto community was unhappy with this though since it made no provision for Proof-of-Stake (PoS) validators and was effectively seen as a direct attack on Ethereum as well as an attempt to scuttle the emerging Decentralized Finance (DeFi) sector.

Another more crypto-friendly amendment was then put forward by Senators Lummis, Wyden and Toomey and found far more support from the crypto community. Finally a joint amendment was put together by all relevant Senators. The problem here is that the amendment came in late and therefore required everyone to unanimously agree in order for it to pass. Only one Senator, Richard Shelby, blocked the bipartisan amendment after having his own $50 billion amendment to increase military spending denied. See the problem of centralized power? Yeah, I know you do…

The Infrastructure Bill passed without any amendments or clarification on Twitter. This doesn’t seem to bode well for crypto and innovation in the US. Again, this is a short-sighted, hackneyed move to try and capitalize on an industry that legislators know little or nothing about. But how can we expect any kind of radical change without these kinds of instances? They’re 100% inevitable. Crypto, Blockchain and Web 3.0 are disrupting the status quo, so for governments, globalists, hegemons and big corporates, it poses a significant threat to their bases of power.

#Time to Give Up?

Hell no! This is the time to fight, more than ever before! The future of crypto is the world’s future. If we give up on it, we may as well just give up on the one chance at freedom we actually have. Those who have entrenched their power and authority seek to deepen their influence and remain on their thrones forevermore. It’s up to all of us to make sure that doesn’t happen!

Now before you go calling me a lunatic (which I very well might be), keep in mind that the Senate does not hold absolute power and that the House of Representatives will still need to vote on the Infrastructure Bill. Besides this, Nancy Pelosi, the Speaker of the House, has said she won’t take up the Infrastructure Bill until the Senate deals with the Reconciliation Bill (which is yet to be written). September 15th is the date by which the legislation is meant to be submitted, but it will likely undergo a number of changes as it moves along the line from committee to committee.

There are ways and means to fight the Infrastructure Bill, and just because the Senate passed it doesn’t mean it will actually stick. Having said this, it doesn’t mean it won’t stick. The point here is that nothing is set in stone right now, which means there’s still hope that things will turn around. Making it harder for crypto companies to operate in the US will simply send money and development offshore, so when someone actually wakes up and realizes this, there may even be some provisions to protect the crypto industry in order to foster innovation and encourage real socioeconomic growth.

No matter what happens in the coming months, regulation is here and will continue to develop over time. More importantly, crypto, DeFi, Blockchain and NFTs are here to stay. It seems like every single day, more and more people are questioning the systems that govern their lives and taking steps to help dismantle those structures that have kept them from prospering. The best way to help fight harmful regulation is to get involved, have your say and do what you can to help make the world a better place. You have a voice, so make it heard!

Venit enim potest: Come what may…

Brynn is the Content Manager at ARK.io, lead DeFi writer for MarketSquare and die-hard metalhead. When not researching yield farming, he spends his time crushing demons in DOOM or shredding his favorite axe.
Tags:
DeFi
Crypto
Regulation
Share:
More from MarketSquare
View all