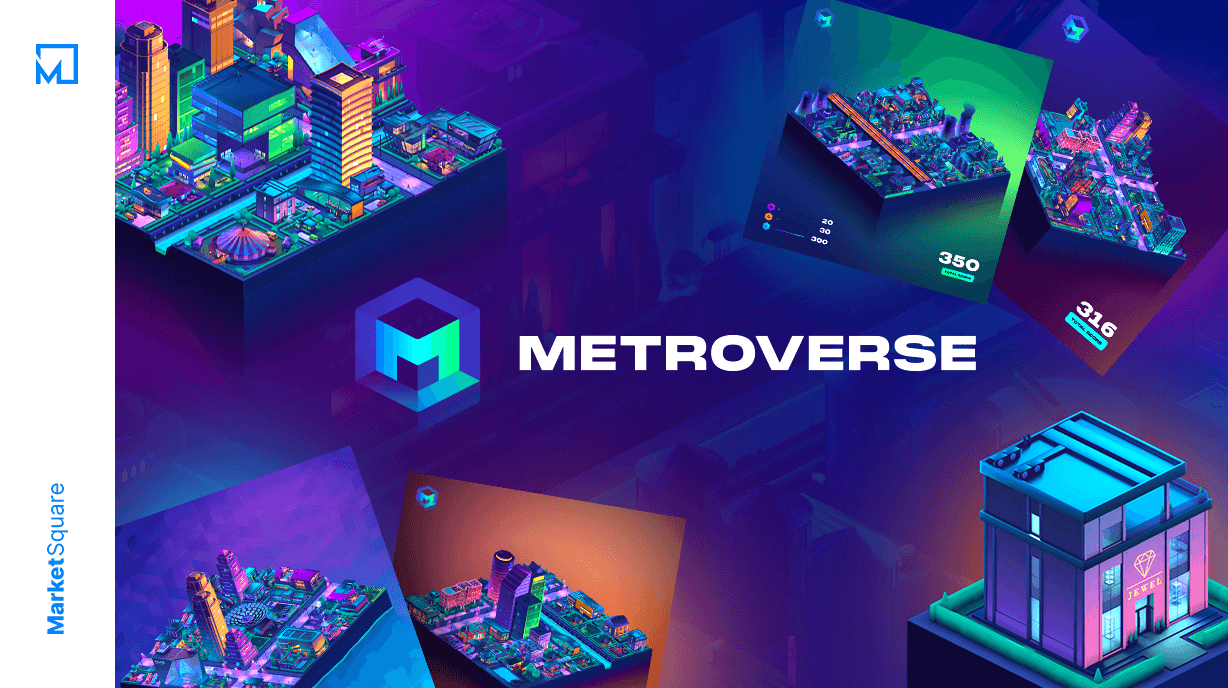 Hey everyone! Welcome to another great Discovery of the Day in which we bring you one of our top picks from the realm of NFTs, Blockchain gaming and the metaverse. MarketSquare recently moved into its Open Beta, meaning you can now sign up for a profile and explore all the site has to offer, so be sure to get your profile and join our growing community. In today’s edition we take a closer look at an NFT land trading strategy game built on Ethereum…Welcome to Metroverse!

When I was a kid I played many different kinds of games—real-time strategy, first-person shooters, role-playing games, you name it, I was into it…or at the very least, I had experience in each genre. I distinctly remember certain simulator games that I particularly enjoyed including Jane’s Longbow Gold, Simcopter and SimCity 2000. If you had to gauge my interests based on these three games alone, it would be flying helicopters and running cities (which I assure you isn’t the case).

Anyway, in SimCity 2000, you get the opportunity to build up your own metropolis and ensure that its inhabitants are provided with all the necessary facilities and infrastructure they require in order to live their lives and meaningfully contribute to society. Now this is much easier said than done—you have to set tax rates, build roads and highways, provide residents with electricity, construct schools and hospitals, and take great care ensuring that garbage and sewage are adequately dealt with. In many ways, these duties are just the tip of the iceberg as there are a host of other considerations you need to make. In addition, natural disasters and, um…alien invasions (I’m serious) could really put a damper on your plans. 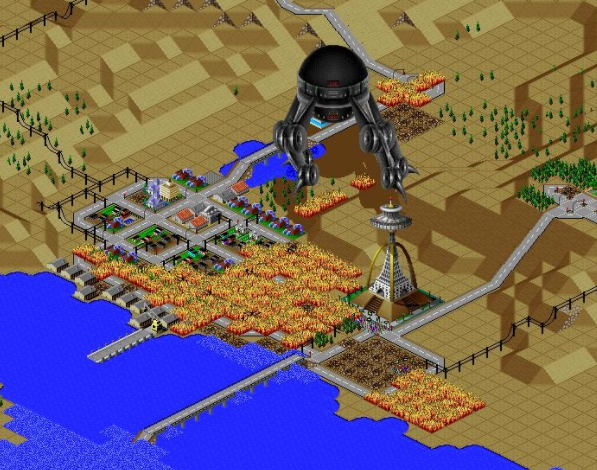 There you are, just minding your own business, and then BOOM! Aliens!

Aliens and tornadoes aside, SimCity 2000 was not an easy game, and at the age of 8 or 9, I found myself impeached on more than one occasion (the nerve of my constituents, really!) Having said this, I was able to build some pretty awesome cities, one of which was along a coastline that I created as an homage to my hometown of Durban, South Africa. After several years serving as the expansive urban megalith’s mayor, I was booted for reasons I can’t recall (something about mismanagement of funds or something, you know the drill).

Needless to say I’ve been a SimCity fan since, so having stumbled across today’s Discovery of the Day, you can bet that my interest was piqued. The prospect of a Blockchain version of SimCity, or even just something akin to it, is very intriguing indeed. So, without further ado, let’s get into it!

#Your Very Own City Block(chain)

Metroverse is an NFT-based land trading strategy game constructed on the foundations of the Ethereum Blockchain. There are a total of 10,000 city blocks in the Metroverse with each one being characteristically unique. A single block, represented by an ERC-721 NFT, may contain residential, industrial, commercial and/or public buildings. Since each block is an NFT, there will only ever be one of each minted, and given their distinct features and intricate layouts, they are virtually impossible to replicate.

Players must use a strategic approach to collect and trade city blocks so that they can grow their economies and earn $MET, Metroverse’s in-game currency. The main idea is to collect multiple city blocks and build up neighborhoods since every block yields MET tokens, and so with more blocks in action, more MET can be generated. $MET can be used within the game’s economy to improve players’ holdings and generate even more MET in the process.

So let’s see one of these city blocks up close and discuss some of its features in a little more detail: 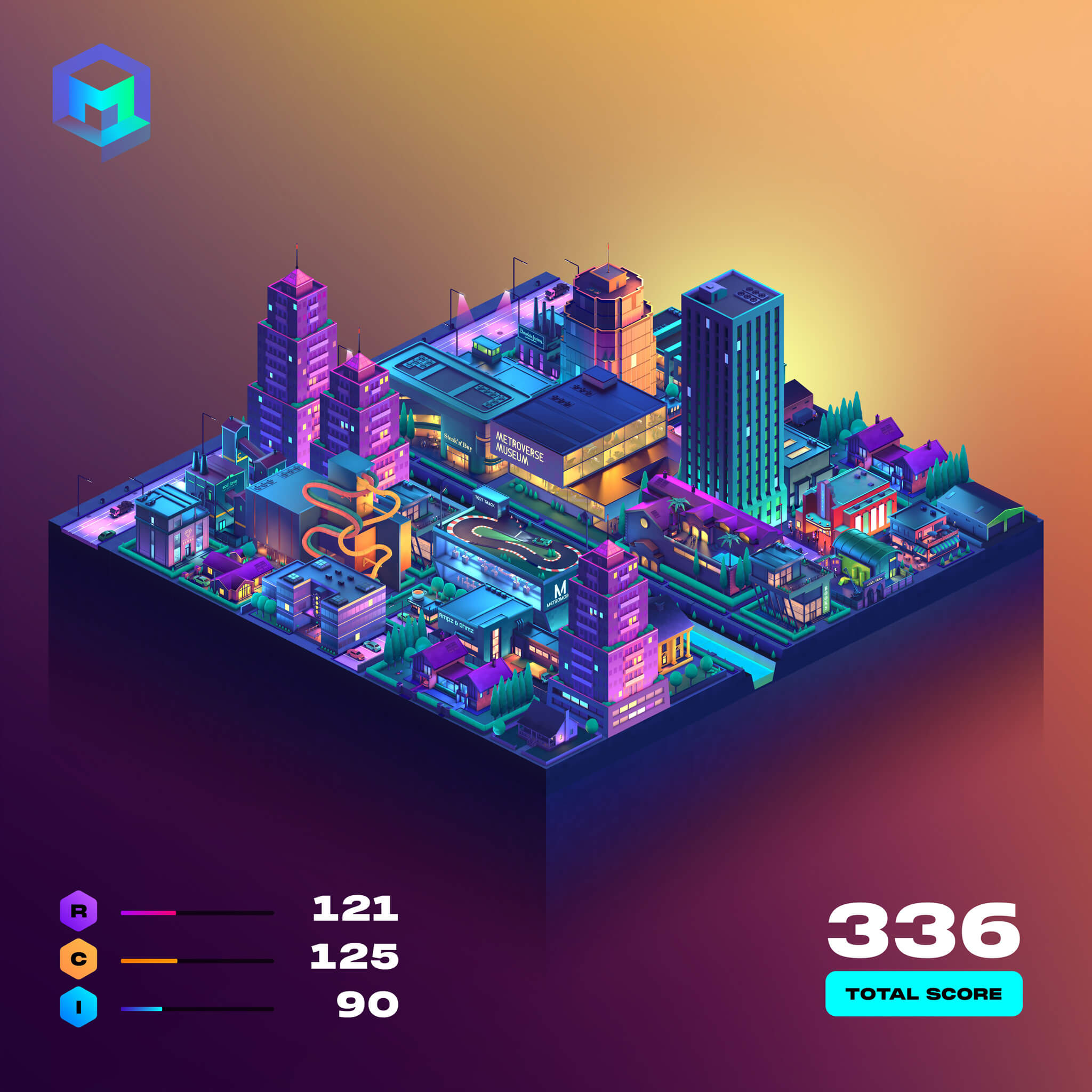 City blocks contain a beautifully colorful visual representation of the NFT itself as well as a few key metrics. In the bottom left-hand corner you’ll spot three colored letters and bars along with numbers to the right of each. R stands for residential, C for commercial and I for industry. You’ll notice here that R and C have scores of 121 and 125 respectively while I only has a score of 90. In the bottom right-hand corner you’ll see the number 336, the total score that this NFT has when the three adjacent figures are added up. The total score of a given block is always between 200 and 400—no more, no less

Pathways describe the different kinds of infrastructure that allow for transportation to occur within each city block. As such, Pathways may consist of:

Every single city block will feature one horizontal and one vertical pathway that appears in a random location within a block. Since there are always two pathways, 15 tiles are always dedicated to them while the remaining 49 are for buildings.

The team behind Metroverse is pretty extensive and includes developers, designers, artists and community management specialists with several years of experience in their respective fields.

Metroverse is right at the beginning of its journey, so pretty much everything on their Roadmap is about to happen or due to be fulfilled in the near future. Once the $MET token has launched, Mayors will be available for mint. Later, Metroverse plans to release a Player versus Player (PvP) game, but only once Mayors have been introduced into the mix. See for yourself: 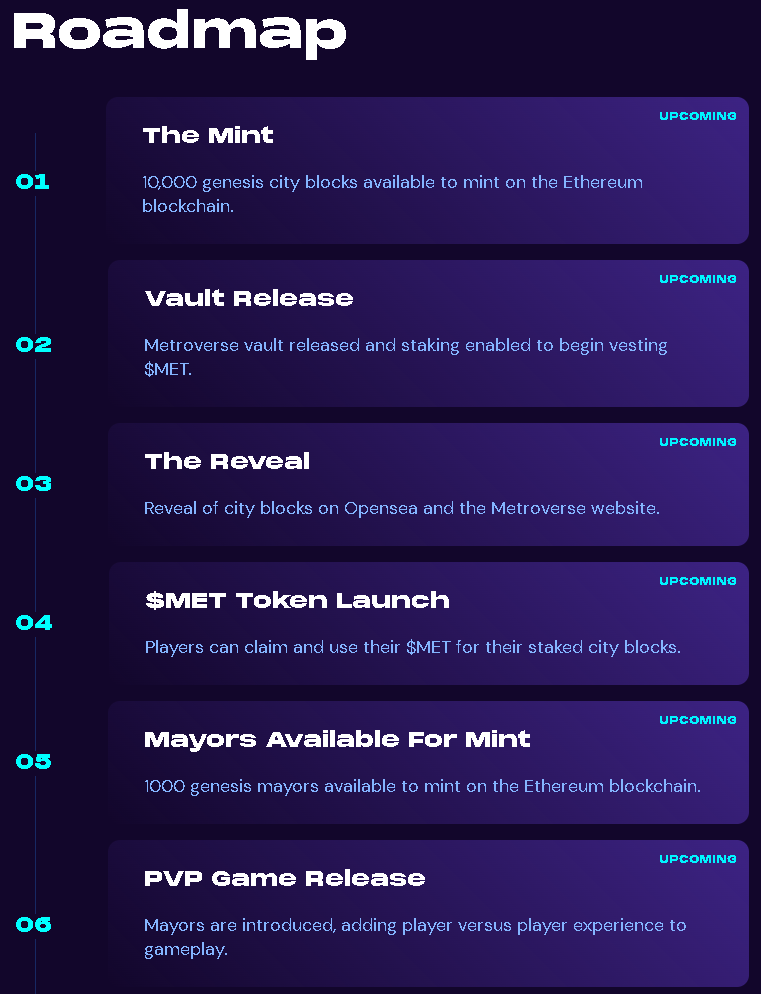 If you want to check out the Metroverse Roadmap in its original form, click here

#The Future of Metroverse

There’s a lot going on with Metroverse, but in short, the Whitelist Sale takes place on Tuesday, January 18th while the Public Sale will be held one day later on Wednesday, January 19th. FYI, according to their website, each city block will cost 0.1 ETH (excluding gas) to mint.

So is Metroverse popular? Judging by their substantially large social media following, I would confidently answer ‘yes.’ Just take a look at this Twitter post regarding their upcoming mint on Tuesday:

Are you ready for the Metroverse mint on Tuesday?! 🤩

If you're not yet on the whitelist, here's one final chance! We're randomly giving away 100 WL spots an hour before the mint!

So yeah, Metroverse seems to have garnered a whole lot of interest and support, and based on their active Twitter and awesome looking NFTs, it seems like this support will continue to grow for the foreseeable future. For this reason I strongly recommend you follow Metroverse on Twitter and join their Discord so that you receive all the latest news as and when it’s released.

For more information about Metroverse, check out their FAQ section on their official website and/or read their Documentation

Thanks for joining me today. If you haven’t signed up for a MarketSquare profile yet, get to it so that you can check out the site in all its glory and get all the latest Blockchain news and views you so direly crave. Until we meet again crypto fans, stay safe and keep an eye out for those incredible projects. Bye!