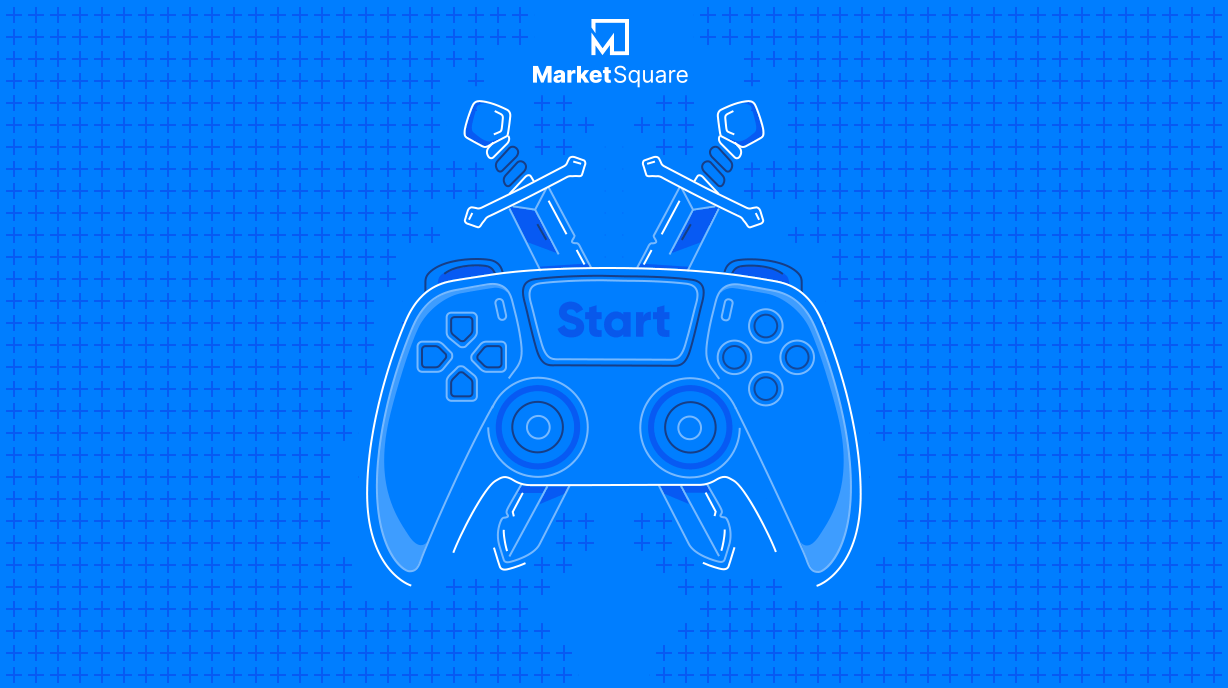 Welcome to Around the Square! These articles highlight industry trends, projects on MarketSquare, and general news as it relates to the blockchain industry. Today, we are taking a look at 8 Amazing Games Coming to MarketSquare. Let’s dive in!

Blockchain technology has a wide variety of use cases that impact the way we take ownership and possession of our digital purchases. Blockchain technology will not only impact ownership over our digital items but it will also revamp game economies and provide numerous opportunities for developers. We at MarketSquare feel that gaming is so important that we have even etched out a place on our homepage specifically for games! Let’s run through some of the most innovative games and development studios coming to MarketSquare!

Splinterlands is a digital, collectible card game built on blockchain technology. It is similar in concept to games like Magic the Gathering and Hearthstone where you build up a collection of cards, which have various stats and abilities to use them to battle other players in skill-based matches.

Gala Games is a powerhouse development studio working on Town Star and their upcoming MMORPG, Mirandus! own Star, is a deceptively simple-looking but incredibly deep farming simulation in which a user builds a farm to compete in weekly competitions. At various places, NFTs can be used in the game to provide bonuses but are not required to play, have fun, or compete.

Mirandus, the MMORPG/Adventure Simulator currently under development by Gala Games is working to completely redefine both the game development pipeline, as well as the gameplay model by putting the power in the hands of the players and giving them ultimate control over the in-game economy.

Axie Infinity is a digital pet universe where players battle, raise and trade fantasy creatures called Axies. To play the game players start by purchasing three Axies on the Axie Marketplace. The game is currently in alpha phase, but in the future players will be able to start playing without having to purchase Axies. Instead, they will receive non-transferable Axies that have a capped earning potential. After a player has acquired their Axies they can play the PVE adventure mode, battle with their teams in PVP or breed their Axies. All Axies that are earned through breeding can then be used to battle, trade or be put up for sale on the Axie Marketplace.

Rising Star is a card-based RPG where you work your way up from street musician to global megastar. The game has you doing everything on your path to stardom, from completing missions all the way to unlocking permanent fans in the form of collectible NFTs. The most intriguing thing about Rising Star, besides all of the care and thought that went into the game mechanics, is the ability for players to own their in-game assets. NFTs and special cards unlocked during playthroughs can be sold within the in-game marketplace. Blockchain and gaming open the door to a multitude of different possibilities for gamers and Rising Star does a great job highlighting these aspects.

CryptoBrewMaster lets players set out to collect ingredients, upgrade their brewery, and craft their own beer! The main purpose behind CryptoBrewMaster is to create a game that is not only fun but teaches aspiring craft beer brewers the ins-and-outs of beer production. The game takes a technical approach to brewing in regards to how players need to collect the correct equipment and design a recipe prior to creating their beer. In furtherance of their main purpose, CryptoBrewMaster also partners with different breweries, equipment manufacturers and suppliers in order to connect aspiring brewers with reputable businesses from all around the world!

Rabona is a massive multiplayer online soccer management simulator. Players decide how to build and develop their team, take on the role of the head coach, and manage the financials of their club. Lead your club to the top of the league and become League Champion in a game that embraces all areas of team management.

EGAMERS deserves an honorable mention on our list since they have extensive and in-depth coverage on all things gaming in the blockchain space. Their site covers a wide variety of topics. Things that you might stumble across include:

#Working on a Game?

Are you currently developing a game that utilized blockchain technology? Reach out to us and tell us about it! We would love to have you on MarketSquare!

Make sure to join MarketSquare by becoming a part of our growing community on Discord , YouTube and Twitter

Ray Alvarez is the CEO of ARK.io. He has a background in Law and a blackbelt in martial arts. When he isn't working, he likes to read about NFTs, gaming, and the latest advancements in Blockchain tech.
Tags:
None
Share:
More from MarketSquare
View all